"It's been 25 years. The truth has not arrived yet. We must end this story, for me, for my mother, for Irish people."

Sophie Toscan du Plantier’s son Pierre Louis Baudey-Vignaud has made a fresh appeal to the Irish public for information about his mother's murder.

The brutal murder, which took place in the town of Schull in West Cork in 1996, triggered one of the biggest murder investigations Ireland has ever seen and became a national obsession.

END_OF_DOCUMENT_TOKEN_TO_BE_REPLACED

Baudey-Vignaud said on Friday night's The Late Late Show: "It's been 25 years. The truth has not arrived yet. We must end this story, for me, for my mother, for Irish people.

"Irish people, you have a murderer still living in Ireland.

"This very little part of Ireland must find peace again."

In 2019, a French Court convicted Ian Bailey of her murder but he was not present for the trial after winning a legal battle against extradition.

Ireland did not extradite Bailey due to a Supreme Court ruling in 2012 that the Irish extraterritorial provision was not the equivalent of the French legislation and therefore they were not reciprocal.

Bailey has never been charged in connection with the case in Ireland and he has maintained his innocence.

END_OF_DOCUMENT_TOKEN_TO_BE_REPLACED

He also urged the Director of Public Prosecutions to reconsider the decision not to charge Bailey.

"I'm not saying that he is guilty. The French said he is guilty," Baudey-Vignaud told Ryan Tubridy.

"When you see all the files, I really think that Ireland must go to a trial soon.

"The elements of the files are unambiguous." 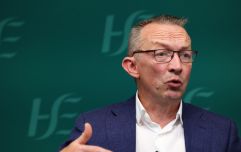 END_OF_DOCUMENT_TOKEN_TO_BE_REPLACED

A clip of the interview with Baudey-Vignaud is available to watch below. The full interview can be watched on the RTÉ Player.

Those with information about Ms Toscan du Plantier's murder can contact any Garda station or call the Garda confidential line on 1800 666 111.

popular
The JOE Friday Pub Quiz: Week 265
Emergency services rush to high-rise building on fire in Tallaght
Ryanair is seeking applicants for "the worst job in Ireland"
Two prisoners who absconded from Loughan House in Cavan arrested by Gardaí
Hollywood couple Joe Manganiello and Sofia Vergara seen enjoying a Cork chipper
QUIZ: Can you master this General Knowledge Quiz?
A modern classic from Quentin Tarantino is among the movies on TV tonight
You may also like
8 hours ago
Man in his 20s seriously injured after shooting in Cork
23 hours ago
Taoiseach believes people will "be patient" if planned lifting of restrictions doesn't go ahead next week
1 day ago
Man in his 40s dies following jeep crash in Clare
1 day ago
National Lottery reveals 28 locations where tickets worth over €35,000 each were sold
1 day ago
Ryanair is seeking applicants for "the worst job in Ireland"
2 days ago
Leo Varadkar: "No question" about 22 October reopening if everyone vaccinated
Next Page