Adam King stole the hearts of a nation when he appeared on this year's Late Late Toy Show, and now two days later, he is still the topic of conversation.

The six-year-old from Cork told Ryan Tubridy about his love for all things intergalactic on Friday night, all while blessing the audience with a "virtual hug" every now and again. 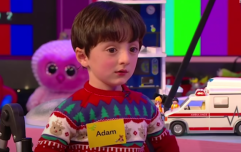 END_OF_DOCUMENT_TOKEN_TO_BE_REPLACED

But his love of outer space has made waves all around the world, with NASA now responding to him.

The National Aeronautics and Space Administration has responded to a clip of Adam, saying that it "can't wait" for him to join the team.

NASA continued: "There’s space for everybody at NASA, and we can’t wait for him to one day join our team of dreamers. We’ll be here when he’s ready."

There’s space for everybody at NASA, and we can’t wait for him to one day join our team of dreamers. We’ll be here when he’s ready. 🌟 pic.twitter.com/WJCzue9O13

And it didn't stop there.

Former commander of the International Space Station Chris Hadfield had already said that the two should talk together, while NASA astronaut Shane Kimbrough said that he was "inspired" by Adam, and that he hopes to meet soon.

Adam - I’ve been lucky enough to CAPCOM many spaceflights. We should talk space together. Take care, be good - Chris@RTELateLateShow https://t.co/XacYA9ncKT

Adam - so inspired by you! Can’t wait to meet you one day. Hope to see you at @NASA_Johnson soon! https://t.co/qvl1mfadmK

Houston, we certainly do not have a problem with any of this.

2020 may well be turning things around right at the end.

House of Rugby Ireland · Quinn Roux on finding a home in Ireland and Mike McCarthy brings the absolute HEAT!
popular
Yewande Biala releases statement discussing racism on Love Island
The JOE Friday Pub Quiz: Week 227
Bernie Sanders is using his inauguration meme to raise money for charity
Gardaí warn of scam targeting AIB customers
QUIZ: The JOE Music Quiz: Week 41
20 of the best comedies to watch on Netflix right now
Wife of man who died from Covid-19 pleads with public to wear masks
You may also like
6 hours ago
20 of the best comedies to watch on Netflix right now
2 days ago
Here's the lineup for The Late Late Show this week
2 days ago
Netflix confirm Bridgerton Season 2 is on the way
2 days ago
Here are the best movies on TV this evening
2 days ago
The full list of all the new shows and movies coming to Netflix in February
2 days ago
10 prequels that are actually better than the movies that came before
Next Page