Had a missed call from any of these numbers? Do not call them back

It has scam written all over it...

According to Donegal Daily, phone users have been getting constant calls from unknown numbers from foreign countries.

Calls have been received from as far as the Seychelles and they often come at the same time of the day, each day, and ring for short periods before stopping. 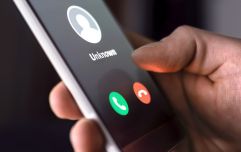 END_OF_DOCUMENT_TOKEN_TO_BE_REPLACED

Ireland’s communications regulator ComReg has warned that these could be scam calls and that people should be vigilant when answering or ringing back unknown numbers.

popular
New powers to allow Gardaí request the passcode for smartphones
It's official, these are the sunniest counties in Ireland
Matt LeBlanc has seen the memes of him as every Irish auld lad and very much enjoyed them
QUIZ: Can you name all of these counties from their nicknames?
The JOE Movie Quiz: Week 106
QUIZ: You won't be able to guess all these brands from their slogans
QUIZ: Take on this tasty challenge of your General Knowledge skills
You may also like
1 week ago
Vodafone Ireland warns of "sophisticated scam SMS" circulating in Ireland
2 months ago
Man arrested after attempting to destroy evidence of criminal activity with bribe payments of €17,000
2 months ago
Department of Social Protection issues warning over "sophisticated" phone scam
2 months ago
Actor warns of 'Safe Account' fraud after being "scammed out of every penny"
4 months ago
Gardaí and HSE issue warning over Covid-19 vaccine scams
4 months ago
Gardaí warn of scam targeting AIB customers
Next Page