Pic: There's an exact replica of The Inbetweeners' yellow car for sale in Mayo

We're strongly considering making a bid for this beauty...

The Inbetweeners are four of our favourite gentlemen on the planet. The TV show is a classic, the first movie was good and the second movie was even better, hilarious craic altogether.

Like all great TV shows, it's the small details that make the difference and The Inbetweeners is no exception. There are so many relatable moments during the show and one of our favourites is the moment Simon's parents buy him a car and it turns out to be a real babe magnet... it's not. 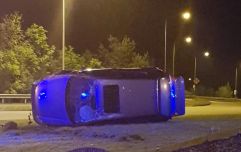 END_OF_DOCUMENT_TOKEN_TO_BE_REPLACED

Hint - NEVER let your parent pick out your first car.

Simon's little yellow tin can carried the boys on many the adventure; London clubbing, trip to the theme park etc. and, even though it was a bit of a crock, there was something lovable about it. In fact, we love it so much we feel that it ranks alongside such iconic onscreen cars as James Bond's Aston Martin and Michael Knight's KITT so when we saw this advert on DoneDeal.ie we got very excited.

A man in Mayo is selling an exact replica of Simon's car and he's flogging it for just €400... 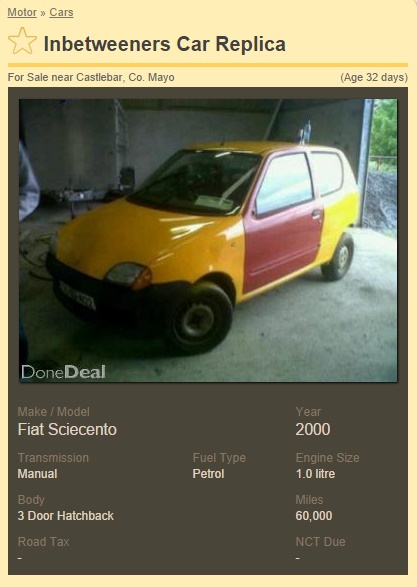 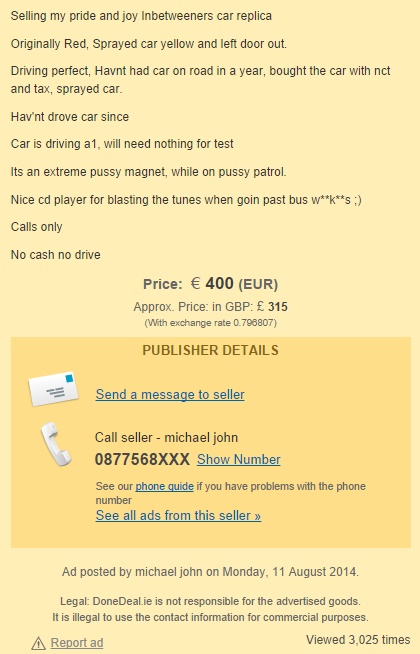 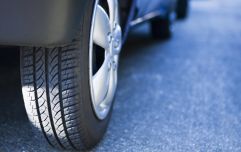 END_OF_DOCUMENT_TOKEN_TO_BE_REPLACED

The ad has been up on DoneDeal for a month so get in touch quickly to avoid disappointment. If you're a bus w*nker we reckon you should get on it straight away, it looks like a hell of a deal to us.

Here's the link to the advert if you're interested.

popular
Man hasn't put arm down for 10 years - and this isn't even a world record
Jeffrey Dahmer’s dad thinks he knows what’s to blame for son becoming a serial killer
QUIZ: Test your knowledge with this Ultimate Friends Character Quiz
€600 energy credits and free schoolbooks for children set to be announced in Budget 2023
House Of The Dragon is already better than Game Of Thrones
The JOE Friday Pub Quiz: Week 313
QUIZ: Name the country for each of these non-capital cities
You may also like
1 year ago
QUIZ: How well do you know your car logos?
2 years ago
Five ways to ensure your car is ready for the Irish winter
3 years ago
PIC: Learner driver gets stuck on "sheep highway" in Kerry
4 years ago
Ford cars have been recalled in Ireland due to major safety risks
4 years ago
PIC: Garda stop car in Kildare and it would be easier to list the laws the driver didn't break
4 years ago
Big changes could be on the way for Ireland's young motorists
Next Page