Police in Australia have appealed for help tracing the whereabouts of a missing pregnant Irish teenager.

18-year-old Katie Cash, who was 38 weeks pregnant at the time she was last seen, left a hospital in Randwick, New South Wales, on 13 July.

The teenager, who police have said may also go by a different name, was seen walking out of the building on CCTV cameras two weeks ago.

Police have "grave concerns" for her welfare.

She is described as a white female with a slim build, short dark hair and green eyes. She also has a scar on the right side of her forehead. 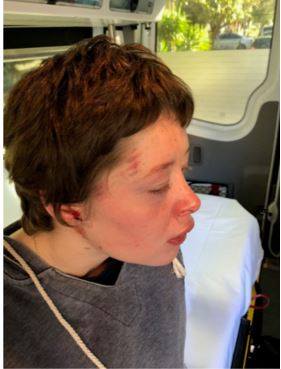 "Police are appealing for public assistance to help locate a woman missing from Sydney’s east.

"At the time she was last seen, Katie was 38-weeks pregnant and officers attached to Eastern Beaches Police Area Command hold grave concerns for her welfare.

"Ms Cash may also go by another name.

"Katie is described as being of Caucasian appearance, of thin build, with short dark hair, green/hazel eyes and a scar on the right side of her forehead.

"She was last seen wearing a grey top, grey and white floral pants and no shoes.

"Anyone with information or knows Kate’s whereabouts is urged to contact Crime Stoppers: 1800 333 000 or https://nsw.crimestoppers.com.au.

"Information is treated in strict confidence."

popular
TOWIE star Mark Wright is officially the worst player on FIFA 21
QUIZ: Can you identify these world cities on a map?
Dublin beauty salon owner arrested after reopening for second consecutive day
Galway Lotto players urged to check their tickets for unclaimed December prize
The full list of all the new shows and movies coming to Netflix in March
10 years on, the ultimate example of Great Trailer Terrible Movie has yet to be topped
Government looks set to abandon €9 substantial meal rule this year
You may also like
11 hours ago
The expiry dates of driving licences has been extended again
12 hours ago
Government looks set to abandon €9 substantial meal rule this year
15 hours ago
Government announces changes to the order people will receive vaccines
1 day ago
Level 5 restrictions to remain in place until 5 April
1 day ago
45 further Covid-19 deaths confirmed, 575 new cases
1 day ago
Met Éireann issues weather warning for all of Ireland
Next Page