"I lost my mother and now I watch my wife falling victim to the same powerful forces."

Prince Harry has released a powerful statement condemning the British media for their treatment of his wife, Meghan Markle.

Markle, a former actress, has been the subject of what Prince Harry has called a "ruthless campaign" by the British tabloids ever since the couple got together. 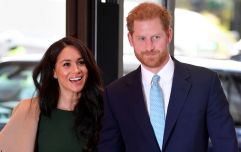 END_OF_DOCUMENT_TOKEN_TO_BE_REPLACED

In a statement issued on the Sussexes official website on Tuesday evening, Prince Harry called out the British press, while also referencing the death of his mother, Princess Diana.

Diana was also subject to similar scrutiny by the British tabloids, with Harry writing: "Because my deepest fear is history repeating itself. I’ve seen what happens when someone I love is commoditised to the point that they are no longer treated or seen as a real person.

"I lost my mother and now I watch my wife falling victim to the same powerful forces.

"We thank you, the public, for your continued support. It is hugely appreciated. Although it may not seem like it, we really need it."

Markle has now filed a claim against Associated Newspapers over the misuse of private information, infringement of copyright and breach of the Data Protection Act 2018.

A legal spokesperson from Schillings, who are representing The Duchess of Sussex said:

“We have initiated legal proceedings against the Mail on Sunday, and its parent company Associated Newspapers, over the intrusive and unlawful publication of a private letter written by the Duchess of Sussex, which is part of a campaign by this media group to publish false and deliberately derogatory stories about her, as well as her husband.

"Given the refusal of Associated Newspapers to resolve this issue satisfactorily, we have issued proceedings to redress this breach of privacy, infringement of copyright and the aforementioned media agenda”.

House of Rugby Ireland · Munster can't beat Leinster, Six Nations squad and John Cooney interview
popular
RTÉ Prime Time footage shows tanned Irish holidaymakers returning from Lanzarote
Leo Varadkar rules out going straight to Level 3 restrictions in March
QUIZ: Can you name all of these countries just from one of their cities?
Holly Willoughby criticises influencer for travelling to Dubai during pandemic
Pharmacists urge people of Ireland to take Vitamin D supplement
Warners Bros reveal first footage of mysterious sci-fi blockbuster with Hugh Jackman
QUIZ: Do you know the collective name for these groups of animals?
You may also like
4 months ago
Prince Harry and Meghan Markle sign multi-year deal with Netflix
1 year ago
The Queen releases official statement on Meghan Markle and Prince Harry's future within the royal family
1 year ago
Queen to hold crisis talks over Prince Harry and Meghan announcement
1 year ago
Prince Harry and Meghan Markle are officially stepping down from their royal duties
1 year ago
Donald Trump denies calling Meghan Markle nasty, despite comments being recorded
1 year ago
BBC presenter fired over 'racist' tweet about Harry and Meghan's baby
Next Page