Republican lawmaker joins mob, cheers rioters, livestreams attack then says he was there as 'independent media'

A Republican lawmaker from West Virginia who joined, cheered and livestreamed the violent insurrection of Trump supporters who stormed the Capitol building in Washington DC on Wednesday has said that he wasn't part of the mob, but rather was there as "an independent member of the media".

Derrick Evans, posted the video to his Facebook page, where his page name is "Derrick Evans - The Activist", but he later deleted the post.

END_OF_DOCUMENT_TOKEN_TO_BE_REPLACED

Evans, a newly elected member of West Virginia's House of Delegates, was clad in a helmet and military-style gear and could be heard cheering as those ahead of him.

At one point, he leads the crowd in a chant of "Trump!" and then shouts "They're in!" when the mob gains entry to the Capitol building.

The video received condemnation from state officials from both parties who slammed his involvement in the mob, but Evans did not deny his presence in the mob, rather he said he was there as a member of the media.

“I want to assure you all that I did not have any negative interactions with law enforcement nor did I participate in any destruction that may have occurred,” Evans said in the statement.

“I was simply there as an independent member of the media to film history.”

The 34-year-old was sworn into office in December and although he ran as a Republican, is part of a group of Trump loyalists who identify as members of a "patriot" movement. 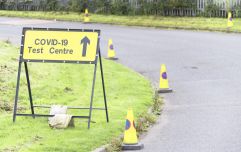 END_OF_DOCUMENT_TOKEN_TO_BE_REPLACED

Evans posted another video outside the building before the insurrection which he has not deleted.

“All you liberals, lay down. We don’t care what you liberals think,” Evans said in a livestream that remains posted to his personal Facebook page.

“Patriots are rising up in this country ― better get used to it.”

Evans is a well-known anti-abortion activist who garnered attention online by harassing people outside clinics in West Virginia. He has also posted vaccine misinformation and false reports of voter fraud online as well as helping to organise two buses of largely maskless "patriots" from West Virginia to Washington DC.

popular
Clint Eastwood's final western is among the movies on TV tonight
Revolut co-founder donates €100,000 to Late Late Toy Show appeal
The JOE Friday Pub Quiz: Week 271
Toy Show viewers can't get enough of Finn from last night
Ryanair's "virtue signalling" claims are indicative of Ireland's view on the Irish language
Iconic nightclub venue in Galway announces permanent closure
QUIZ: Let's get cracking with this General Knowledge Quiz
You may also like
4 days ago
At least 45 dead after bus crashes in flames in Bulgaria
1 week ago
Kyle Rittenhouse breaks silence after not guilty verdict
1 week ago
Jury finds Kyle Rittenhouse not guilty on all charges in shooting trial
1 week ago
Cow escapes field, heads to resort and gets stuck on water slide
1 week ago
Australian Prime Minister makes headlines with "Irish girl in a brewery" comments
1 week ago
Infowars host Alex Jones guilty by default in Sandy Hook defamation lawsuits
Next Page