Rory McIlroy's case against his former management agent has been settled

It's all done and dusted.

The world's number one golfer wasn't in court today, but his team have released a statement saying the case has been "entirely resolved to the satisfaction of both parties." 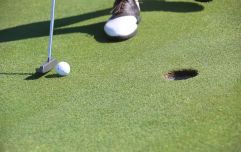 END_OF_DOCUMENT_TOKEN_TO_BE_REPLACED

A lot of people expected the court case to last over a month, so this morning's move has come as a big surprise.

McIlroy was suing his Horizon over the fees charged while he was a client, while they were counter suing him for breaking his contract with them in 2013.

McIlroy can get back to fully concentrating on his golf now, which is bad news for everyone else considering he's been ripping it up anyway.

popular
One of Keanu Reeves' best movies has just been added to Netflix
A terrific crime thriller is among the movies on TV tonight
Daniel Craig's best pre-James Bond film is among the movies on TV tonight
The 50 most iconic songs of all time* have been revealed
QUIZ: Do you reckon you can get 15/15 in this General Knowledge Quiz
The JOE Movie Quiz: Week 131
QUIZ: Can you get full marks in this General Knowledge Quiz?
You may also like
3 months ago
Golf's version of Drive to Survive is reportedly coming to Netflix in the very near future
2 years ago
"Very chaotic" - Irishman describes being struck by lightning on US golf course
2 years ago
Irishman hospitalised after lightning strike on US golf course
2 years ago
Shane Lowry given a hero's welcome in his hometown of Clara, Co. Offaly
2 years ago
Gardaí release plan for Shane Lowry homecoming in Offaly this evening
2 years ago
WATCH: RTÉ's interview with Shane Lowry's granny is absolutely wonderful
Next Page