A mural created by Street art collective SUBSET, which was unveiled just last month in Dublin city centre, has been painted over.

Both SUBSET and Blindboy Boatclub took to Twitter to share their disappointment upon hearing the news. The mural, which was originally painted on the walls of Hangar nightclub in St Andrew's Lane, has now been covered with a dark grey paint.

As predicted. Dublin council has made @SubsetDublin paint over the mural of myself and Luke Kelly with Grey. pic.twitter.com/bwdPREgcy7

JOE contacted Blindboy Boatclub, who mentioned his disappointment about the covering up of the mural and of other thought-provoking street art in Ireland in recent times.

"It's fierce disappointing," he said.

"Subset have been brightening up dull spaces all over Dublin. People were engaging with my myself and Luke's Mural, taking selfies, having craic. That's what art is supposed to be, socially engaged," he said. 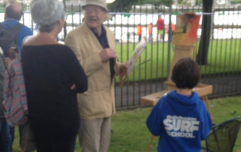 PIC: This Rubberbandits story from Limerick today will put a smile on your face

END_OF_DOCUMENT_TOKEN_TO_BE_REPLACED

"A genuinely engaging spectacle for real people, not just hidden away in a gallery for those with an art education. Dublin council have disappointed me. How is it OK to paint a wall one dull colour of paint? But it's illegal to paint the same space with multiple colours. Subset should come down to Limerick and do a mural.

"Limerick city is very proud of art and of our class art college. The council here are fairly generous when it comes to spaces for murals too. Ps. I'm sure the ghost of Luke Kelly is pure sickened too."

Titled 'Rocky Road to Dublin (City Council)', a dig at Dublin City Council after they demanded that a Stormzy mural in Smithfield be removed over a lack of planning permission, the painting was comprised of a mural of Blindboy Boatclub of Rubberbandits fame and Dubliners' singer Luke Kelly.

This was in response to a backlash the collective received on Reddit when their Kendrick Lamar mural - painted to coincide with his sold-out 3Arena gig - was criticised as a marketing scheme and for featuring a non-Irish artist.

The original mural, which included the Rubberbandits' Blindboy Boatclub next to Donald Trump, located outside the Hangar nightclub, was erected in January and included the following quote from the Limerick man: "Donny is more terrifying than a Jack Russell with human hands".

JOE has reached out to Dublin City Council for comment who said: "There was a complaint on 8 March regarding murals at this location and since they were unauthorised, a notification issued.  Murals have since been removed in compliance."


popular
Here's Week 21 of JOE's 19 in 90 quickfire quiz
Interactive infographic shows real-time spread of coronavirus outbreak
The 50 most iconic songs of all time* have been revealed
Galway parish reports record high attendance at Ash Wednesday drive-thru
Emirates is recruiting new cabin crew members in Galway for tax-free jobs
Rallies prove that Sinn Féin are playing the game better than anyone else right now
Singer Duffy reveals she was drugged and raped while being held captive
You may also like
2 months ago
Social media influencers agreed to promote poison in Blindboy's new BBC series
2 months ago
"I am not a celebrity" - A conversation with Blindboy Boatclub
1 year ago
Hozier has just posted a cover of a Van Morrison song purely because Blindboy dreamt about it once
1 year ago
International Podcast Day is a thing, so here's the top 20 most popular podcasts right now
1 year ago
Rubber Bandits' Blindboy set to get his own BBC Three show
2 years ago
People were full of praise for Blindboy Boatclub’s interview on the Tommy Tiernan Show
Next Page