As it stands, there are separate entrances for men and women in Saudi Arabian restaurants.

Saudi Arabia has lifted a ban that segregates women and men in restaurants, according to its government.

It had been mandatory for restaurants to have one entrance for families and women and another for men on their own but the Saudi government now says it will be left up to businesses to decide whether they want to have gender-based segregation.

The news was announced by the Saudi ministry of municipalities and rural affairs, as they attempt to ease the strict rules that have been in place in the country for years.

Earlier this year, Saudi women were allowed to travel abroad without a male guardian's permission for the first time, and in 2018 they ended a decades-long ban on female drivers.

During the summer, a new rule came in that now allows women over the age of 21 to apply for a passport without authorisation, putting them on an equal footing with men. 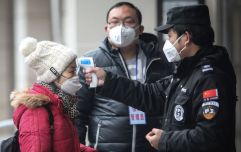 END_OF_DOCUMENT_TOKEN_TO_BE_REPLACED

Women are also being given the right to register births, marriage or divorce.

Saudi Arabia has played host to a number of major sporting events in the past 12 months, including a WWE event that held the first women's match in the country, and Anthony Joshua's boxing match against Andy Ruiz at the weekend.


popular
The lineup for this week's Late Late Show has been revealed
Ten Chinese cities locked down and Beijing celebrations scrapped as Wuhan virus death toll rises
QUIZ: Can you guess the pixellated movie posters?
QUIZ: Can you name all these European countries just from their vowels?
Met Éireann says there's a risk of snow for parts of Ireland this weekend
QUIZ: How many of these Recess characters can you name?
Man being treated for suspected case of coronavirus in Belfast
You may also like
1 day ago
Wuhan shuts down public transport as death toll from virus rises
1 day ago
World Health Organisation says there's 'no doubt' e-cigarettes are harmful
2 days ago
KFC apologises for ad showing young boys staring at woman's breasts
2 days ago
Four people dead as China confirms Wuhan coronavirus can be transmitted by humans
3 days ago
Ireland now has the fifth largest number of billionaires per capita
6 days ago
Study finds that cattle can talk to each other about how they feel
Next Page