Satire, fiction, drama, reality, politics, all just seem to be merging into one muddle of a genre.

Scotland's The Herald, routinely published their TV listings for the week as most papers do, as an act of loyalty to the past. The TV listings seem to exist in 2017 so people cast a quick eye over them before recalling we use our phones for everything and remembering the time of a film on Wednesday will prove next to impossible, so  streaming it immediately is the only real option.

But let it never again be said that TV listings are mundane, not when you have Damien Love of  The Herald, crafting masterpieces from mayhem.

Love in alerting his readership to the week's scheduling, describes the twilight zone of the American inauguration and pens an eloquent description of a farce, the exact one many of us feel we have been living since November.

After a long absence, The Twilight Zone returns with one of the most ambitious, expensive and controversial productions in broadcast history. Sci-fi writers have dabbled often with alternative history stories – among the most common is the “What If The Nazis Had Won The Second World War” setting – but this huge interactive virtual reality project, which will unfold on TV, in the press, and on Twitter over the next four years, sets out to build an ongoing alternative present.

The story begins in a nightmarish version of 2017 in which huge sections of the US electorate have somehow been duped into voting to make Donald Trump president. It sounds far-fetched, and it is, but as it goes on it becomes more and more chillingly plausible.

Today’s feature-length opener concentrates on the gaudy inauguration of President Trump, and the stirrings of protest and despair surrounding the ceremony, while pundits speculate gravely on what lies ahead. It’s a flawed piece, but a disturbing glimpse of the horrors we could stumble into, if we’re not careful.

Rising temperatures may be cause of increase in dangerous fungal infections

END_OF_DOCUMENT_TOKEN_TO_BE_REPLACED

Whether Damian Love ran this by his editor or whether he acted a lone wolf with a mission to satirically entertain is yet to be discerned.

And lest we forget, our own RTÉ's TV guide listing of 2016, where they inadvertently revealed their institutional sentiments towards Queen Elizabeth. Scheduled just after Top of the Pops Christmas and just before Shrek, RTÉ squeezed in a spikey zing, another unexpected stroke of jibing genius. 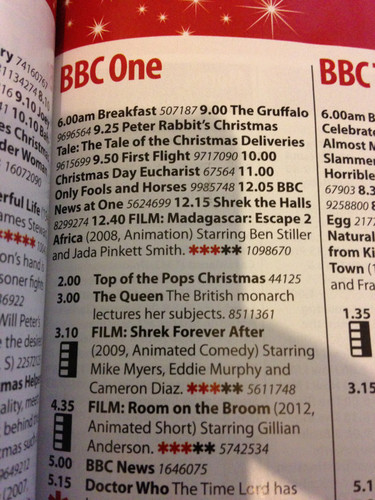 We think more anarchy amongst TV listings writers would be a comfort to us all in these times of twilight.

popular
Amazon Prime Video has just added 21 big movies to its library
Here is a list of every Bank Holiday in Ireland in 2023
The 50 most iconic songs of all time* have been revealed
One of the best crime thrillers ever is among the movies on TV tonight
Mark Hamill on the one piece of dialogue he got removed from the original Star Wars
5 years ago, Hollywood took a massive gamble on a huge sequel... and lost big time
Woman dies from hypothermia after telling doctor she 'couldn't afford heating'
You may also like
1 week ago
Princess Diana's former aide Paul Burrell reveals his cancer diagnosis
1 week ago
The most handsome man in the world according to science has been named
1 week ago
Man dies in the US after being shot by dog
2 weeks ago
Vatican investigating allegations of lockdown 'sex party' at UK cathedral
2 weeks ago
Andrew Tate to remain behind bars for an extra month as Romanian police extend detention
2 weeks ago
Irish dad dies trying to save 11-year-old daughter from drowning
Next Page