A national snow-ice warning is in place, with the east of the country set to be the worst affected.

A status orange snow-ice warning has been issued for Dublin, Kildare, Louth, Wexford, Wicklow, Meath and Waterford from 8pm Saturday evening until 9am Sunday morning.

Met Éireann has shared their forecast of “scattered heavy snow showers [which] will lead to accumulations in places and some drifting”.

A status yellow snow-ice warning is also currently in place for the whole country. It’ll remain in effect until 9am on Monday morning. It is set to be very cold in many areas, with wind chill, icy patches and accumulations of snow.

According to the forecast, the snow showers will be heaviest and most frequent over Leinster and east Ulster, with “significant accumulations” likely there, but snow showers are also set to be well scattered elsewhere. 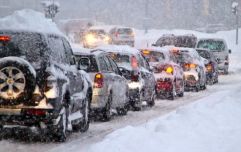 END_OF_DOCUMENT_TOKEN_TO_BE_REPLACED

There will be icy conditions with lowest temperatures of -3°C, but it will feel colder due to fresh east to northeasterly winds.

Sunday is expected to be a very cold day, with further sleet and snow showers mainly in Leinster, east Munster and east Ulster.

Some heavy snowfall is expected in eastern areas in particular. Top temperatures will range from 1°C - 4°C, and northeast to easterly winds will continue to bring a significant wind chill.

popular
County where winning Lotto jackpot ticket worth over €5.5 million was sold confirmed
Amazon Prime Video has just quietly added 15 big movies to its library
Netflix reveals full line-up of new shows and movies arriving in July
Met Éireann issues thunderstorm warning for 11 counties
Lidl announces six new warehouse clearance sales... for a limited time only
7 new and exciting Dublin attractions you need to try this summer
Friends co-creator says she's now "embarrassed" by the series' lack of diversity
You may also like
7 months ago
Winter is officially here – snow is on the way this week
1 year ago
Met Éireann says snow will fall tomorrow night before a rainy weekend
1 year ago
Status Yellow snow warning issued for six counties
1 year ago
Motorists urged to exercise caution on the roads this week due to snow and ice
1 year ago
Two men fined £10,000 each for organising snowball fight in Leeds
1 year ago
Snow and ice warning issued for 13 counties ahead of bitter weekend
Next Page