This means that it can now officially be signed into law.

An appeal challenging the outcome of the Eighth Amendment referendum was refused in the Supreme Court on Friday.

The court dismissed the appeal due to it not meeting constitutional criteria. 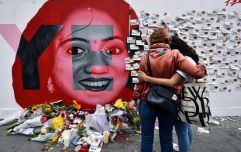 END_OF_DOCUMENT_TOKEN_TO_BE_REPLACED

Taoiseach Leo Varadkar confirmed that this decision means that legislation to permit abortion in Ireland is set to be passed by the Oireachtas in the near future.

You can read an excerpt from the official court report below.

"Finally, it is sought to raise the question of the order for costs made against Ms. Jordan. The discretion which both the High Court and the Court of Appeal enjoyed to decline to award costs against Ms. Jordan notwithstanding the fact that she had lost her case undoubtedly exists.

"There is well settled authority on the circumstances in which such a discretion might be exercised in constitutionally related challenges such as those which are involved in this case and the considerations which properly go to the exercise of that discretion. A final judgment in respect of costs involves the exercise of a discretion in accordance with those principles.

"In the absence of there being a stateable argument that the manner in which the exercise of that discretion which occurred in the case in question was wrong in principle, it is clear that the constitutional threshold could not be met. There is no such stateable argument disclosed here."

The court report in full can be found on courts.ie.

popular
Woman killed in Clare crash named as Peggy Twomey, mother of Marty Morrissey
Man in his 70s dies following two vehicle collision in Galway
These are the most generous counties in Ireland, according to GoFundMe
Every child in Direct Provision will get a Christmas present this year following fundraiser
A fun action flick with Nicolas Cage is among the movies on TV tonight
Amazon Prime Video has quietly added 8 big new movies to its library
Schools and third level institutions to remain closed in counties affected by orange or red weather warnings
You may also like
2 years ago
Martyrs - What price do women have to pay when we ask them to share their stories?
3 years ago
Very low turnout suggests nonsense politics is wearing down Ireland's will to live
3 years ago
Abortion Rights Campaign to host seventh annual March for Choice later this month
3 years ago
Simon Harris confirms that abortion services in Ireland will be free
3 years ago
"The result of this referendum has created a new reality" - National health institutions share concerns over abortion services
3 years ago
The Eighth Amendment has officially been removed from the Irish constitution
Next Page