Teenager charged in relation to murder in Kilmainham

He will appear before the courts on Tuesday morning.

A 16-year-old boy arrested in connection with the murder of a man in Kilmainham in Dublin on Monday has been charged.

The teenager was arrested following the incident which occurred in a laneway off Madison Road, Kilmainham in Dublin 8. 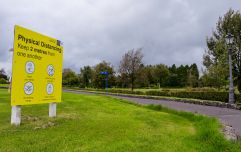 429 new cases of Covid-19 confirmed in Ireland, one more death

END_OF_DOCUMENT_TOKEN_TO_BE_REPLACED

He is due to appear before the Dublin District Children Court at 10.30am on Tuesday morning, 15 September.

Gardaí launched an investigation after the body of a man was discovered in the laneway in the early hours of Monday morning.

Gardaí have appealed for witnesses or anyone with information to contact them at Kevin Street Garda Station on 01-666 9400, or the Garda Confidential Line on 1800 666 111.