Ominously, Trump said: “It’s only the beginning of our fight to Make America Great Again!”

Donald Trump has promised that the transition to the presidency of Joe Biden later this month will be orderly, while maintaining that he totally disagrees with the outcome of the election and that “the facts bear me out”.

Trump issued a statement following a day that will go down in infamy in the history of the United States, when his supporters stormed the Capitol Building in Washington DC amid truly terrifying scenes in the US capital.

END_OF_DOCUMENT_TOKEN_TO_BE_REPLACED

One person was shot dead, three people died as a result of medical emergencies and 52 people were arrested in Washington yesterday, leading to a state of emergency to be declared in the city until 21 January, Joe Biden’s first day in office.

Despite the scenes in Washington yesterday, Congress was still able to convene to affirm Biden’s victory as the next President of the United States, prompting Trump to issue a statement promising an “orderly transition” on 20 January.

But that wasn’t all he said…

“Even though I totally disagree with the outcome of the election, and the facts bear me out, nevertheless there will be an orderly transition on January 20th,” Trump’s statement read.

“I have always said we would continue our fight to ensure that only legal votes were counted.

“While this represents the end of the greatest first term in presidential history, it’s only the beginning of our fight to Make America Great Again!”

On Wednesday, Facebook, Instagram and Twitter – Trump’s favoured method of communication – all took action to lock his accounts in an effort to address the spread of misinformation and the incitement of violence. 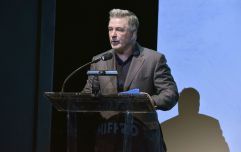 END_OF_DOCUMENT_TOKEN_TO_BE_REPLACED

A video in which Trump tells aggressors at the Capitol Building "I love you", before urging them to go home, was removed from Twitter, Facebook and YouTube, while three tweets were removed from his Twitter account, which was suspended for 12 hours with the threat of permanent suspension if the tweets were not removed.

The Big Reviewski || JOE · The Big Reviewski with Dune, a mini-Hangover reunion & the best of Timothée Chalamet
popular
Report: Crew left Alec Baldwin film set in protest before fatal shooting
Dublin museum voted Europe’s leading visitor experience... again
The JOE Friday Pub Quiz: Week 266
The JOE Music Quiz: Week 78
PICS: The man with the biggest penis in the world has one unbelievable problem with it
The 50 most iconic songs of all time* have been revealed
Alec Baldwin was told prop gun was safe before fatal shooting
You may also like
1 day ago
Alec Baldwin expresses "shock and sadness" over fatal film set shooting
1 day ago
Human remains found positively identified as Brian Laundrie
2 days ago
Alec Baldwin fatally shoots woman with prop gun on movie set
4 days ago
Facebook looks set to change its name as part of rebrand
4 days ago
CNN's John King reveals on-air he has multiple sclerosis
5 days ago
Weird 'blacked out' island on Google Maps sparks wild conspiracy theories
Next Page