Video: Man somehow survives after crashing pickup truck off upper deck of a motorway in Boston

Caution should be exercised behind the wheel at all times, but especially so when conditions aren’t the best, as has been the case in snowy Boston in recent weeks.

One motorist in the area is lucky to be alive after crashing his pickup truck off the upper deck and onto the lower deck of a highway and through a light pole, an exit sign and a fence on Interstate 93 at the weekend. 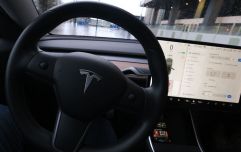 END_OF_DOCUMENT_TOKEN_TO_BE_REPLACED

The driver in question, 33-year old Vannak Sao, had to be extricated from his vehicle by firefighters and was subsequently brought to hospital, where his condition was stabilised.

He will face charges of operating under the influence of alcohol and negligent operation of a motor vehicle but he’s lucky to still be alive after the crash, which was captured by CCTV cameras, occurred shortly before 6.30am on Sunday morning.

Thankfully, no other vehicles were involved in the crash and nobody else was hurt.

The Big Reviewski || JOE · The Big Reviewski with Dune, a mini-Hangover reunion & the best of Timothée Chalamet
popular
HBO announces a new Sopranos series is in the works... kind of
QUIZ: Can you name all the countries beginning with L?
CONFIRMED: Nightclubs to open at 100% capacity, 11.30pm curfew has been removed
"It’s obvious these guidelines were issued by Government without any meaningful consultation with the hospitality sector."
Two Gardaí assaulted during protest in Dublin City Centre
Here's the lineup for this week's Late Late Show
The cast of Succession on shooting the next season in Ireland
You may also like
1 month ago
QUIZ: How well do you know your car logos?
4 months ago
The ultimate checklist of everything you need for your next Irish road trip
5 months ago
The iconic 'Bus W***ers' car from Inbetweeners is now up for sale
6 months ago
Over 170 cars clocked speeding on Irish roads in first two hours of National Slow Down Day
7 months ago
Ireland's first average speed cameras to be introduced on mainline motorways
7 months ago
Motorists warned of 'ghost broking', as 70% of drivers are unaware of the practice
Next Page