Self-proclaimed "accidental and occasional gay rights activist" Rory O'Neill AKA Panti Bliss over the weekend delivered an incredibly impassioned and powerful post-show oration at Dublin's Abbey Theatre, as she spoke about prejudice and homophobia in the aftermath of the RTÉ controversy surrounding her recent appearance on The Saturday Night Show.

The moving and compelling speech came in the wake of viewer complaints, RTÉ payouts and a large-scale Dublin city centre protest organised by LGBT Noise, an event that was attended by numerous other groups and individuals who support equal rights for gay people. 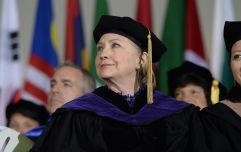 END_OF_DOCUMENT_TOKEN_TO_BE_REPLACED

Here at JOE we applaud Panti for having the enormous courage to address the theatre audience in such an articulate and compelling manner, and we wish her every success as she, along with many, many others, importantly strives for equal rights for all in Irish society.

Video made with the help of Conor Horgan, Caroline Campbell, Nicky Gogan and Ailish Bracken and with thanks to cast and crew at the Abbey Theatre.

The Big Reviewski || JOE · TBR Spotlight: Loki - Episode Two - 'The Variant'
popular
Public warned about another sophisticated phone scam doing the rounds
Garda union hits out at "absolute confusion" over outdoor drinking and dining
QUIZ: Name all the counties of Ireland that contain 3 vowels or more
The Queen appealing for volunteers to weed the garden of her Sandringham Estate
There's a new phone scam doing the rounds - do NOT answer to or call back this number
QUIZ: Can you name all these European countries from a list of cities?
QUIZ: Can you get full marks in this potentially very frustrating general knowledge quiz?
You may also like
1 year ago
Rebel Wilson stole the show at the BAFTAs with an incendiary speech
3 years ago
Get Out star reveals secret speech rules enforced by awards show bosses
3 years ago
WATCH: Panti Bliss gives amazingly powerful opening speech at Edinburgh Fringe
4 years ago
The Great Scone Map shows how people in different parts of Ireland pronounce 'scone' differently
4 years ago
WATCH: Jeff Bridges brings back The Dude for John Goodman's Walk Of Fame ceremony
6 years ago
Video: Ricky Gervais read his hilarious winning speech out at the Emmys last night... even though he didn't win
Next Page