Let’s just say she didn’t call them a great bunch of lads.

Queen Elizabeth has been caught calling Chinese officials “very rude” by her own cameraman in an incident that won’t do much to help relations between China and the UK.

Queen Elizabeth was heard to make the remarks at a recent garden party for her 90th birthday while in conversation with Metropolitan Police Commander Lucy D'Orsi, who was in charge of security during the visit by Chinese President Xi Jinping and his wife last October. 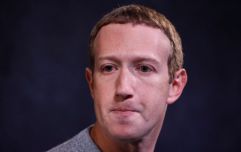 END_OF_DOCUMENT_TOKEN_TO_BE_REPLACED

The footage was released to broadcasters and appeared online overnight.

It comes in the wake of footage showing Prime Minister David Cameron referring to Nigeria and Afghanistan as “fantastically corrupt countries" in conversation with The Queen ahead of the international anti-corruption summit this week.

David Cameron is caught on camera telling the Queen that Nigeria and Afghanistan are "fantastically" corrupthttps://t.co/yHjEu7VKDK

We’ve a feeling a Father Ted-style slideshow might be in order to smooth things over in the coming days.

The Big Reviewski || JOE · The Big Reviewski with Dune, a mini-Hangover reunion & the best of Timothée Chalamet
popular
WhatsApp to stop working on 53 phone models, including iPhone 6
Waterford driver fined for speeding, immediately speeds away, is fined again
Paschal Donohoe confronted on the street by anti-vaccine protestors
FREE NOW reports "200 requests a minute" on Sunday following nightclubs reopening
Three Status Yellow warnings issued as rain set to hammer the country
You can now get paid to watch Netflix and nap
Fresh call for four-day working week from Irish Congress of Trade Unions
You may also like
1 day ago
Pandemic will end when world chooses to end it, says WHO chief
1 day ago
Man under house arrest begs to be sent to prison as he 'couldn't stand his wife'
3 days ago
Report: Crew left Alec Baldwin film set in protest before fatal shooting
3 days ago
Alec Baldwin was told prop gun was safe before fatal shooting
4 days ago
Alec Baldwin expresses "shock and sadness" over fatal film set shooting
4 days ago
Human remains found positively identified as Brian Laundrie
Next Page