E. Coli has been detected in a number of Celtic Pure water bottles.

A number of batches of Celtic Pure bottled water have been recalled after bacteria including E. coli was detected.

Pseudomonas aeruginosa, Enterococci or E. coli bacteria were detected in a range of batches of water bottled by Celtic Pure, and the Food Safety Authority of Ireland (FSAI) have urged people not to drink any of the affected bottles.

Many of the water bottles included in the recall are sold in shops and supermarkets like Aldi, Dunnes Stores and Londis.

The FSAI have said that retailers are requested to remove the implicated batches from sale.

Retailers have now also been advised to display a point-of-sale recall notice in stores where the implicated batches were sold.

They have also said that Pseudomonas aeruginosa poses a higher risk of complications if consumed by severely immunocompromised people such as those who have undergone transplants or chemotherapy.

The following tables show the implicated brands and batches that are included in the recall: 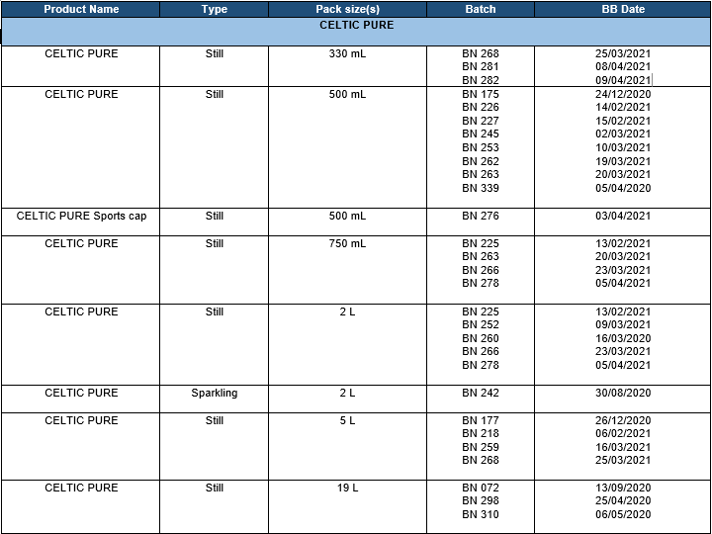 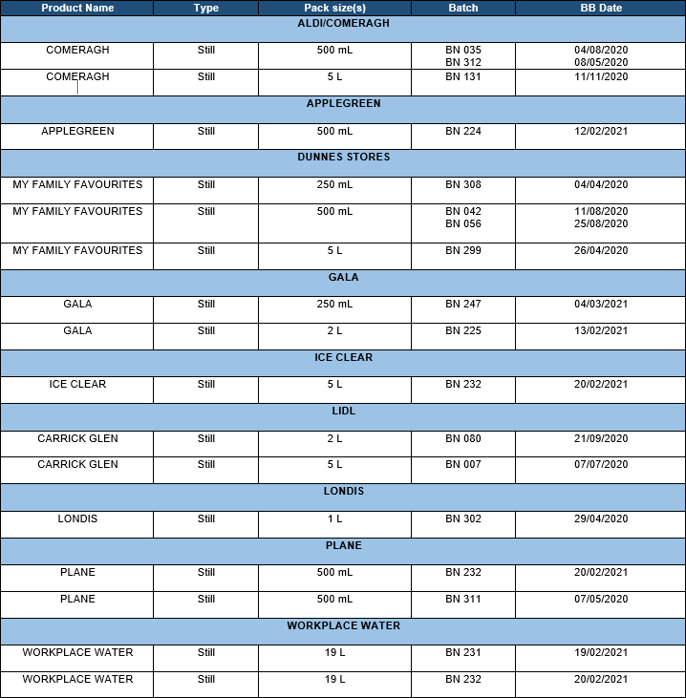 More information on the recall can be found on the FSAI website here.


popular
The JOE Friday Pub Quiz: Week 175
The shortlist for the best breakfasts in Ireland has been revealed
The 50 most iconic songs of all time* have been revealed
Bodies of three children discovered in Dublin home
QUIZ: Can you guess the pixellated movie posters?
Here's the lineup for this week's Graham Norton Show
21 jokes that are so bad they're actually brilliant (but still quite bad)
You may also like
12 hours ago
BBC Africa correspondent Fergal Keane to step down due to PTSD
1 day ago
Man being treated for suspected case of coronavirus in Belfast
1 day ago
Teenager arrested in relation to death of Cameron Blair at a house in Cork
1 day ago
Appeal made for information after a significant jewellery and cash theft in Letterkenny
1 day ago
Met Éireann says there's a risk of snow for parts of Ireland this weekend
2 days ago
Sinn Féin issues legal letter to RTÉ following exclusion from leaders' debate
Next Page