The warning comes as a temperature of 30.1 degrees was recorded on Wednesday - the highest of the year so far.

Met Éireann has issued a thunderstorm warning for four counties on what is officially the hottest day of the year so far.

The yellow warning could see localised thunderstorms with a risk of lightning and spot flooding across Donegal, Leitrim, Mayo, and Sligo and is valid until 11pm on Wednesday night.

END_OF_DOCUMENT_TOKEN_TO_BE_REPLACED

Conditions are set to continue very warm and sunny on Wednesday evening, with the heat potentially sparking the aforementioned thunderstorms across north Connacht and Ulster.

It is also expected to be "uncomfortably warm and humid" on Wednesday nigh,t with any thunderstorms expected to clear, leaving behind dry and clear spells, with temperatures remaining at at least 17 degrees overnight.

Thursday will be another hot and mostly dry day with plenty of sunshine and highest temperatures of 26 to 29 degrees generally, reaching 30 degrees locally.

END_OF_DOCUMENT_TOKEN_TO_BE_REPLACED

The rest of the week is also expected to be very warm and humid with above average daytime temperatures, sunny spells and some thundery showers.

However, things are expected to become slightly cooler over the weekend and into next week as high pressure will weaken and somewhat unsettled weather may make a return.

Friday will be another very warm day with highest temperatures of 25-29 degrees.

Current indications suggest that Saturday will be slightly cooler than previous days with highest temperatures ranging from 18 to 25 degrees, with the possibility of rain. 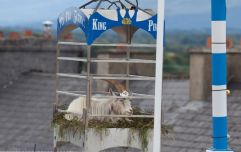 END_OF_DOCUMENT_TOKEN_TO_BE_REPLACED

Sunday is also expected to be a warm day with sunny spells and the chance of scattered showers developing yet again. Highest temperatures will reach between 22-25 degrees.

The heatwave may be coming to an end from next week as Monday will see conditions become closer to average in the west, extending to all areas from Tuesday with the risk of some heavy showers developing throughout the country.

popular
Netflix has just added an incredibly tense 97-minute thriller
QUIZ: Name all the counties of Ireland that contain 3 vowels or more
Prime Video has just added 25 very big movies to its library
Irish people could be treated to spectacular sights in the sky over the next few nights
Eamon Ryan's mother dies in tragic accident on family holiday
A great underseen action thriller is among the movies on TV tonight
The Sweatiest Movie Quiz Of All Time
You may also like
18 hours ago
Man in his 70s dies in workplace accident in Roscommon
20 hours ago
Four Irish food businesses were served with closure orders in July
22 hours ago
Forget about ultra cheap Ryanair flights for the foreseeable future, says O'Leary
23 hours ago
Met Éireann issues another high temperature warning for Ireland this weekend
23 hours ago
Body of a man recovered following drowing incident in river in Carlow
1 day ago
Eamon Ryan's mother dies in tragic accident on family holiday
Next Page