"We've got someone who obviously got an education in America... Sorry sunshine, wrong place."

A video of New Zealand's Deputy Prime Minister Winston Peters responding brilliantly to a Covid-19 sceptic is being shared widely on social media.

While speaking at a press conference, Peters is addressed by a man who is looking for evidence in relation to coroavirus, asking: "Where is your evidence that there is a virus that causes this disease?" 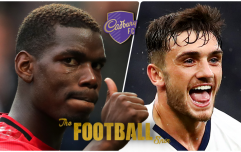 The Football Spin: Defence of Paul Pogba and Ireland's most exciting forward line ever

END_OF_DOCUMENT_TOKEN_TO_BE_REPLACED

Peters told the man to sit down, and said: "We've got someone who obviously got an education in America. 220,000 people have died in the United States. There are eight million cases to date... And here's somebody who gets up and says 'the earth is flat'".

Meanwhile, also in the world of New Zealand politics, Jacinda Ardern has won a second term in office after her rival conceded in the country's general election.

Though the count is not yet finished, the figures released were enough for opposition leader Judith Collins to concede after phoning Ardern.

Ardern won the election in a landslide, with her Labour Party forecast to take around 64 seats in the 120-member parliament.

popular
QUIZ: How will you fare in our ‘Not as it seems’ quiz?
Video: So what exactly did John Terry say to Anton Ferdinand?
The full list of all the new titles coming to Netflix in December
Can you get top marks in Week 57 of JOE's 19 in 90 quickfire quiz
QUIZ: How well do you remember the final season of Game of Thrones?
Eir CEO says opening a call centre in Sligo was a "mistake" as staff weren't sufficiently skilled
QUIZ: Can you tell which of these items can be recycled?
You may also like
17 hours ago
Six further Covid-19 deaths confirmed, 269 new cases
23 hours ago
Irish publicans feel “demonised” by government leaks, accuse NPHET of having “anti-pub agenda”
1 day ago
Report finds meat plant workers are subject to "difficult and dangerous" working conditions
1 day ago
Varadkar says a "short period" of lockdown restrictions may be needed in January or February
1 day ago
Six further Covid-19 deaths confirmed, 226 new cases
1 day ago
"Don't pass the gravy boat" this Christmas, says expert immunologist
Next Page