A Churchill sculpture was given as a gift to George W. Bush by Tony Blair.

Joe Biden has removed a bust of Winston Churchill from the Oval Office, it has been confirmed.

Biden was inaugurated yesterday as the 46th President of the United States, and has already gone about righting the wrongs of his predecessor Donald Trump. 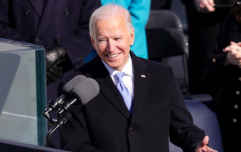 END_OF_DOCUMENT_TOKEN_TO_BE_REPLACED

Biden began his first term in office by signing a number of executive orders on a host of issues, including Covid-19, the environment, immigration and ethics.

In his initial acts as 46th President, he signed no less than 15 executive orders - the first of which were targeted to boost the federal response to the coronavirus crisis.

On the issue of Covid-19, sources told CNN that Biden has had to inherit an almost non-existent vaccination plan from Donald Trump.

It has also emerged that Biden has made some adjustments to the interior of the Oval Office, too - namely removing a bust of Winston Churchill.

A sculpture of the wartime British Prime Minister was given as a gift to George W. Bush by Tony Blair. During Barack Obama's tenure, it was removed and replaced with one of civil rights leader Martin Luther King.

When Trump took over, he decided to display a bust of Churchill again - a move egged on by former UKIP leader, Trump fan Nigel Farage.

END_OF_DOCUMENT_TOKEN_TO_BE_REPLACED

Now Biden has taken over officially, the bust is no longer present. In its place, the 46th President has put a statue of labour campaigner Cesar Chavez, founder of the National Farm Workers Association (now United Farm Workers).

Chavez was awarded the Presidential Medal of Freedom in 1993 for his efforts in organising a grape workers strike.

He said: "Placing a bust of my father in the Oval Office symbolises the hopeful new day that is dawning for our nation.

"That isn’t just because it honours my dad, but more importantly because it represents faith and empowerment for an entire people on whose behalf he fought and sacrificed."

popular
The JOE Friday Pub Quiz: Week 300 - the Triple Century
One of the most underrated sequels of all time is among the movies on TV tonight
A classic Western is among the movies on TV tonight
Rain and thunderstorm warning extended to include 15 counties
Met Éireann gives update on weather warnings for this weekend
New horror movie trailer has one of the best jump scares in years
QUIZ: Can you match all 32 counties up to their province?
You may also like
1 month ago
Former Brexit minister tells US Government to not lecture UK on Northern Ireland Protocol
1 month ago
Joe Biden writes heartfelt letter to the people of Mayo
2 months ago
US President Biden accuses Putin of genocide in Ukraine
3 months ago
Nancy Pelosi praises Taoiseach for "reinvigoration" of housing and health
3 months ago
Taoiseach tests positive for Covid-19 in Washington during St Patrick's Day visit
3 months ago
European Union to impose harsher sanctions on Russia as war escalates
Next Page