The poll also shows the declining popularity of Labour and People Before Profit.

The Sunday Times/Behaviour & Attitude opinion poll was published today, and the results suggest that Fianna Fáil have taken a 12-point lead over Fine Gael.

Fianna Fáil have gained five points since the last poll, while Fine Gael have lost seven, marking the lowest ever standing for the party in this survey.

The full opinion poll results are as follows:

The poll of 923 voters, with a margin of error of 3.3%, was taken in the run-up to the Taoiseach dissolving the Dáil. 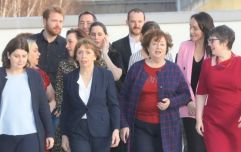 END_OF_DOCUMENT_TOKEN_TO_BE_REPLACED

This last week alone has seen the planned RIC commemorations that Fine Gael had organised later cancelled due to widespread backlash, the since-deleted social media video depicting Fianna Fail TDs running around Dublin city looking for policies set to Benny Hill music, and the homelessness crisis continues to spiral after a man was left with life-altering injuries when his tent was moved while he was sleeping in it.

Tune in to JOE's new politics podcast State Of Us: Election 2020, which will be taking a look at the ever-unfolding stories around this year's election.