We take a look back at a decade-old interview that has been all over the news again this week.

Leo Varadkar has taken illegal drugs at some point in his life. He admitted it on national television on Tuesday night during a political debate, in extremely awkward fashion.

Mícheál Martin proudly stated in the same debate that he has never taken illegal drugs. Meanehile, after dithering for what felt like a lifetime, Varadkar said that he had already answered a question on that very topic in a Hot Press interview 10 years ago.

END_OF_DOCUMENT_TOKEN_TO_BE_REPLACED

We had a look back at that interview (from 19 May 2010), which made for interesting reading 10 years on.

Straight off the bat, journalist Olaf Tyransen referred to the Taoiseach as "Varad-the-Impaler", and describes him as "surprisingly tall". The nickname never stuck, if it was ever a nickname to begin with, much, no doubt to Leo's delight.

The interview started off with a bit of small talk, a bit of light background info and then... BOOM.

END_OF_DOCUMENT_TOKEN_TO_BE_REPLACED

"Did you ever experiment with ecstasy or any other illegal drugs as a teen?" Varadkar was asked.

"Now, that came quickly!", he responded.

END_OF_DOCUMENT_TOKEN_TO_BE_REPLACED

Very carefully worded, you'd have to say. Varadkar owned up to smoking cannabis while he was in college, but that he "wouldn’t be advocating that anybody else do the same".

In the interview, he gave some interesting comments about the head shop debate of the time, saying:

"It would be almost impossible to actually ban head shops because they’ll always be one step ahead of the law, and it might make more sense to try and regulate them.

"But I think you need to have some sort of rational basis on which you decide which substances are legal and which ones aren’t, and which ones you allow people to use, and under what circumstances." 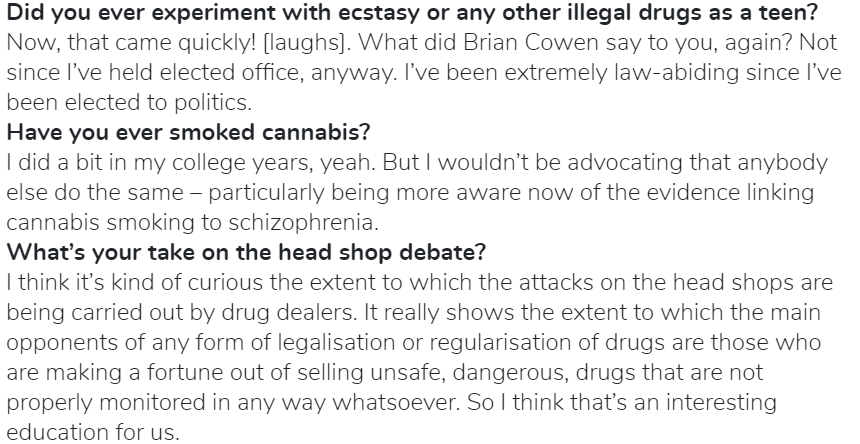 Varadkar was then asked if he believed in an afterlife.

"I don’t know. I think I probably do. I wouldn’t be surprised if there wasn’t an afterlife. I guess I won’t find that one out. I’d love to know, though."

He won't find that one out? Ever? CONFIRMED: Leo Varadkar is immortal.

Varadkar was asked what he believed the differences between Fine Gael and Fianna Fáil - not by Pat Kenny on Wednesday, by Hot Press over  a decade ago.

"The big difference, and the reason I joined Fine Gael, is values. There’s really two things that make the parties very different. The first thing is that Fine Gael is the party that likes to tell the truth. It’s the party that will tell people the truth even when they don’t want to hear it."

Fair enough. As you're aware, the 10 years since has provided a clear distinction between the two parties...

"Would you describe yourself as a right-winger?" Leo was asked later in the interview.

Describing what it means to be centre-right, Varadkar said: "To be somebody who is right of centre is somebody who has broadly liberal-conservative/Christian-democrat ideals, and the basic principles of that is that before you can distribute wealth you have to create it."

From that point on, it's fair to say the interview hasn't aged particularly well.

The then 31-year-old was asked for his views on sexuality, and whether being a politician has helped him much "with the opposite sex".

Obviously, the answer there is no.

At the time, Varadkar was anti-gay marriage, while being adamant that he did not believe homosexuality is morally wrong.

"I do think that marriage is separate. And marriage in our Constitution is very clear that it’s a man marrying a woman, largely with a view to having a natural family, and if they are unable to do that, obviously then they can adopt. And I would be of the view that it doesn’t have to be the case for everyone, but that the preferable construct in a society is the traditional family, and the State through its laws should protect that and promote that."

At this point in his life, he was also anti-abortion, stating that "from a human rights point of view", he didn't want it legalised in Ireland.

The interview ended with our current Taoiseach being asked whether or not he would consider himself an emotional person.

Perhaps not an emotional man. But a fascinating interviewee? In this case, yes.

An interview that Varadkar almost certainly didn't think would come back and bite him 10 years on, is now a major talking point at the center of a general election.

Who'd have thought it?

popular
Conor Mcgregor hit by car ‘at full speed’ while cycling
New Netflix series deserves to be as big as Stranger Things
The JOE Friday Pub Quiz: Week 331
Couple left mortified after best man delivers incredible punchline during speech
Peaky Blinders creator on the lookout for 'skinheads' for new drama
All of the new Netflix movies and shows arriving in February
DJ accidentally shoots herself in the face with a confetti cannon while performing
You may also like
4 weeks ago
Housing crisis "holding us back as a country", says Leo Varadkar
4 weeks ago
Covid booster vaccine now available to everyone aged 18 to 49
1 month ago
Leo Varadkar says he'd rather resign than go into coalition with Sinn Féin
1 month ago
The full list of Irish ministers after the big Government reshuffle
2 months ago
"Don't know what you're talking about" – Leo Varadkar blasted for 'grass looks greener' emigration comments
2 months ago
Support drops for Sinn Féin in latest public opinion poll
Next Page