Oscar-worthy delivery from the iconic actor...

Robert De Niro is doing the media rounds at the moment in support of hotly-anticipated new movie The Irishman, which arrives on Netflix in November.

The early buzz on the film is excellent, with the first batch of professional reviews hailing what is apparently Martin Scorsese's finest work in years.

De Niro's lead performance has also received plenty of praise, along with turns from Al Pacino and the out-of-retirement Joe Pesci. So yeah, the hype is real.

The 76-year-old actor was the guest on CNN's Reliable Sources talk show on Sunday, where he responded to criticism of his outspoken stance on Donald Trump.

De Niro has been openly disparaging of the US President's credentials and behaviour in the past, once famously noting that he'd "like to punch him in the face".

In conversation with host Brian Stelter on Sunday, De Niro addressed those who feel aggrieved by his comments, in particularly cut-and-dry fashion.

"This guy should not be president, period," De Niro noted, prompting Stelter to counter.

"When you say that, folks on Fox come after you. I remember the Tonys, where you got up there and cursed, a lot of criticism of you..." 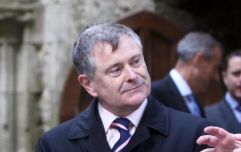 END_OF_DOCUMENT_TOKEN_TO_BE_REPLACED

"Fuck 'em. Fuck 'em," he retorted, prompting an audible gasp from someone off-camera in the studio.

"Sorry!" De Niro quickly threw in for good measure, as Stelter explained that the profanity occurred on cable television and thus won't be subject to a Federal Communications Commission violation.

"But it is still a Sunday morning," the host added.

Check out the clip below, as shared by CNN reporter Oliver Darcy.

—@BrianStelter asks Robert De Niro about criticism he gets from Fox for speaking out against Trump.

Stelter reminds him, "This is cable, so it's not an FCC violation, but it is still a Sunday morning." pic.twitter.com/9IOo1VvXCM

Magnificent delivery from De Niro it must be said, wherever your politics lie.

"Let me say something," he continued.

"We are in a moment in our lives in this country where this guy is like a gangster.

"He's come along and he's said things, done things, we say over and over again, 'This is terrible'. We are in a terrible situation.

"We're in a terrible situation and this guy just keeps going on and on and on without being stopped."