JOE understands that the campaign, which started in Donegal, has led to hundreds of parents sending letters to the Department of Education.

In some cases, teachers have sent letters featuring the sensational and untrue claims home in children’s school bags.

END_OF_DOCUMENT_TOKEN_TO_BE_REPLACED

The same claim has been spread by a new Donegal-based campaign group, called A Parent’s Right. The group has said that it is not responsible for the letters.

The Irish government has not yet made any decision about reforms to sex education. In 2018, the Department of Education asked the National Council for Curriculum Assessment (NCCA) to review the standard of sex education in Irish schools.

Between June 2018 and March this year, the NCCA reviewed the current standard of relationship and sex education and consulted with parents, teachers, students and researchers.

In July, the NCCA published a draft report which said that students felt Irish sex education was “too little, too late and too biological.”

END_OF_DOCUMENT_TOKEN_TO_BE_REPLACED

Between July and October, the NCCA carried out a second consultation on its review of sex education, before it gives its final report to Joe McHugh, the education minister, before the end of the year.

Parts of the Irish RSE curriculum have not been updated since 1997. Some schools still outsource their sex education to private anti-abortion, anti-LGBT groups which don’t teach about same sex relationships or contraception.

As part of its review of sex education, the NCCA commissioned a research paper.

The research paper cited a number of documents and reports, including a 2010 document from the World Health Organization on standards for sexuality education. The same document was also referenced in the NCCA draft report, which said the WHO report had been referenced by stakeholders. 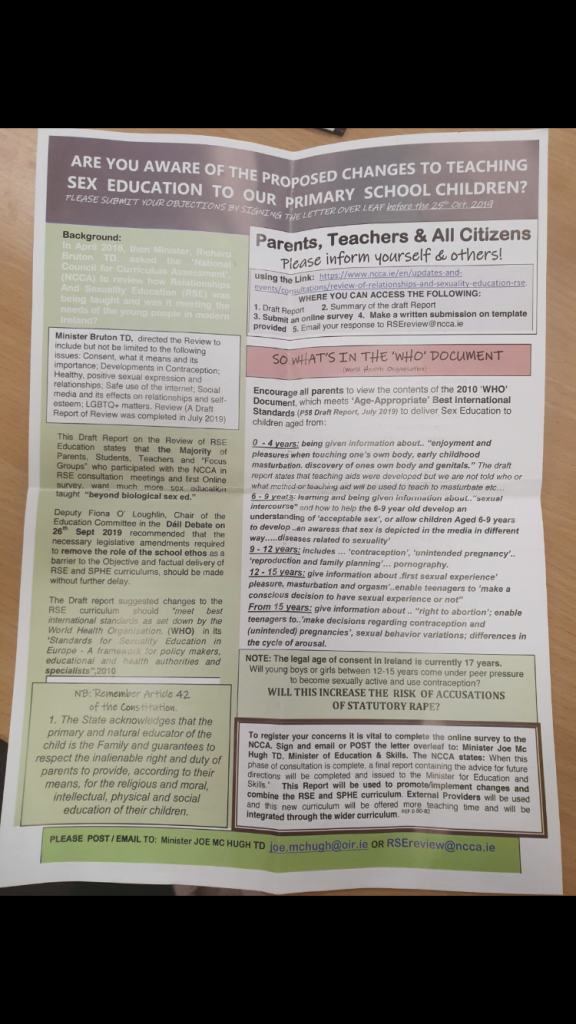 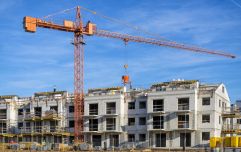 END_OF_DOCUMENT_TOKEN_TO_BE_REPLACED

Despite this, hundreds of letters - which suggest that the NCCA draft report is “adopting” the WHO document - have been printed and shared among parents. The letters, which were first printed in Donegal, call on parents to sign them and send them to the Department of Education.

The letters claim that Mr McHugh, the education minister, is supporting a recommendation where “young children would be exposed to and taught explicit sexual information.” It claims the WHO document is a “frightening attack on the innocence of childhood and on the family.”

The letters, which parents are encouraged to send to Mr McHugh, state:

“I have genuine concerns that the proposed RSE Changes are intended to sexualise children and generate conflict in accepting their own family values, culture and gender. Such changes will be the cause of much emotional upset in young children and will definitely undermine and deflect them from their Religious Faith Teachings.”

“Will young boys and girls between 12-15 years come under peer pressure to become sexually active and use contraception? WILL THIS INCREASE THE RISK OF ACCUSATIONS OF STATUTORY RAPE?”

It is understood that over 200 of the letters have been sent to the Department of Education so far.

A source said that the letters have been shared with parents at four schools in Donegal. In one school, a teacher sent the letters home with children with a note encouraging parents to sign them.

Similar claims to those in the letters have also been made by A Parent’s Right.

The group is critical of plans to reform sex education. On its Facebook page, it has claimed:

“They will sexualise your child from a very young age by exposing them to adult sexual practices!”

The main spokeswoman for the group is Rebecca McNamee, who also goes by the name Rebecca McDaid.

In an interview with a right-wing blog, Ms McNamee claimed that “self-pleasure is the very first thing that will be taught to the children at the ages of 0-4.” She also claimed that the WHO document is “very, very much in the forefront of where we will be going with our sex education of the children.” Ms McNamee was giving an interview about "government plans for explicit sex education" but appeared to conflate the sex education review with a private members' bill from socialist TDs.

Ms McNamee was recently invited onto Virgin Media’s Ireland AM programme to debate sex education reforms with Ruth Coppinger, the Solidarity TD. Shortly after JOE contacted Ms McNamee on Wednesday, the A Parent’s Right Facebook page was deleted. In response to JOE, Ms McNamee said: "As a busy working parent, I cannot suspend my day to deal with every request of a frivolous nature I receive." She also asked for contact details for JOE's lawyer. Ms McNamee said that A Parents Right did not disseminate the letters which were sent to the Department of Education.

It’s understood that incorrect claims about sex education reforms have been spreading among parents in the west of the country.

JOE has seen a WhatsApp message which has been forwarded among parents which claims that the “proposed tyranny” of sex education reforms included the NCCA “insisting that parents want more Explicit Sex information” in schools. The message conflates the government review with a private members bill from Ms Coppinger, the solidarity TD. 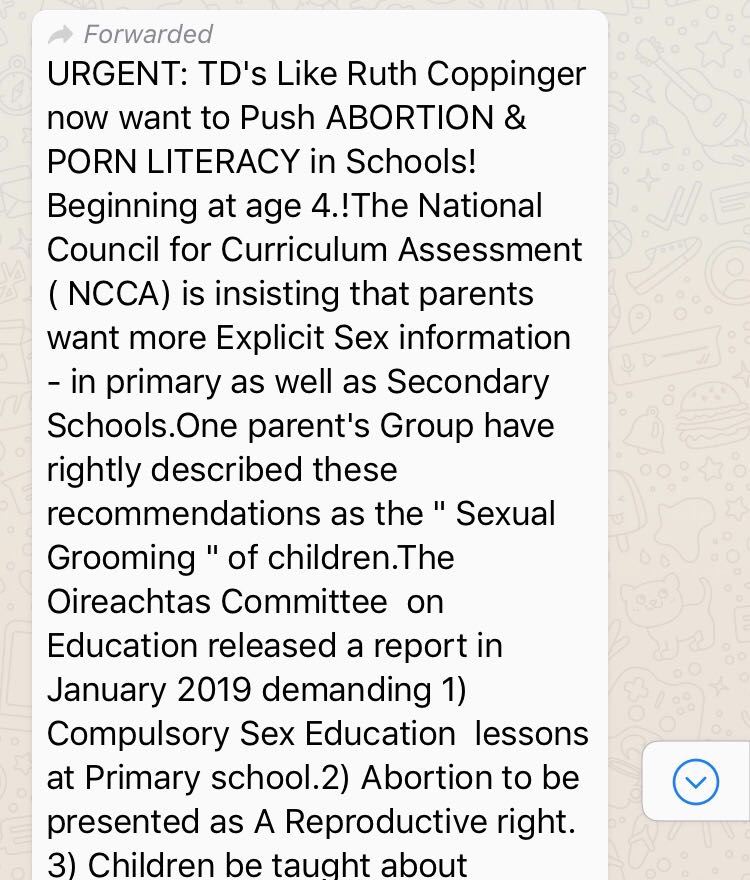 “One parent’s group have rightly described these recommendations as the 'Sexual Grooming' of children.”

“This would be complete state control of our children and grandchildren and is pure filth,” the message said.

popular
The JOE Friday Pub Quiz: Week 279
Public urged to be wary of sophisticated Revolut scam in operation in Ireland
Gardaí release CCTV footage of last known whereabouts of Bernadette Connolly
John Travolta's Irish accent has to be heard to be believed
New Netflix series looks like a must-watch for fans of Drive to Survive
Met Éireann spoils our potential fun by downplaying the possibility of snow
Here's the line-up for this week's episode of The Late Late Show
You may also like
3 hours ago
Gardaí release CCTV footage of last known whereabouts of Bernadette Connolly
21 hours ago
Over one-third of female students have experienced non-consensual penetration, survey finds
1 day ago
Man charged following incident involving deceased man at Carlow post office
1 day ago
Man in his 40s dies after road crash in Meath
1 day ago
Appeal made for witnesses after cyclist hit by car in Kildare
2 days ago
18-year-old woman attacked with metal pole by three men in Belfast
Next Page