"Sympathy for Theresa May? That's lethal".

Alastair Campbell was this week's guest on Ireland Unfiltered, .

Speaking to Dion Fanning on an episode of Ireland Unfiltered that will be broadcast on video and audio this Tuesday, 20 November, Campbell spoke about how “Brexit is like an implosion”, why he believes there should be a second referendum, his battles with alcohol and when his brother was diagnosed schizophrenia. 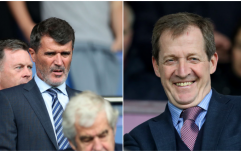 END_OF_DOCUMENT_TOKEN_TO_BE_REPLACED

Of course the topic of Theresa May came up in conversation, for how could it not after the past few days of turmoil in the UK with cabinet ministers resigning and a no confidence motion looming large on the horizon.

But he rejected out of hand the suggestion that we should be feeling sorry for May.

Dion Fanning: There's been a surge of sympathy recently.

Dion: You don't think that's admiration for her resilience?

But I think once you're a leader... there was a period when Gordon Brown, people were starting to feel sorry for him. I can remember once Dennis Skinner saying to me, he said, ‘Once you get the sympathy you've had it.'

I once had this conversation with Bill Clinton. Tony [Blair] had asked me to go see Bill Clinton to talk about myself because I was at a period where there was a real crossroads in my life and I was getting battered left, right and centre and I was thinking of leaving. 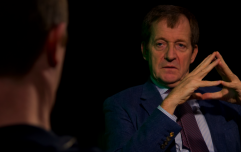 END_OF_DOCUMENT_TOKEN_TO_BE_REPLACED

We ended up talking about Tony and I can remember Clinton saying about Tony, he said ' Sometimes I get the feeling he thinks he should get a blue ribbon for doing the job. The job is the blue ribbon.' It's such a privilege to do the job. So I think that once you start to say about leaders, 'I'm beginning to feel sorry for her', that's a bad place to be.

Dion: I'm not sure how she can think it's a privilege to be Prime Minister at the time she became Prime Minister, considering post-Brexit, it's been all anyone has ever talked about in Britain since.

AC: That's partly because of the way that she's been handling it. Look, I accept it was a very difficult thing to pick up. I don't think it's ever not a privilege to be Prime Minister.

You can listen to the fifth episode of Ireland Unfiltered, Dion Fanning in conversation with Alastair Campbell from this Tuesday, 2o November by simply subscribing here, and you can use #IrelandUnfiltered to join the conversation on social.

The Big Reviewski || JOE · TBR Spotlight: Loki - Episode Six - 'For All Time. Always.'
popular
Dublin cinema named best cinema in all of UK and Ireland
Only Murders in the Building is a must-watch for fans of true crime podcasts
The 50 most iconic songs of all time* have been revealed
PICS: The man with the biggest penis in the world has one unbelievable problem with it
People think they've figured out the ranking of the viewers on your Instagram Stories
15 songs that are always used in sporting montages
Video: This disgusting video of zit-popping is so bad we can’t even look away
You may also like
5 hours ago
England to waive quarantine for fully vaccinated arrivals from EU and US
19 hours ago
Bob Odenkirk taken to hospital after collapsing on Better Call Saul set
3 days ago
Arlene Foster joins GB News as contributor on Nigel Farage's Political Correction show
5 days ago
Belfast judge finds "real prospect" Omagh bombing "could have been prevented"
5 days ago
Covid-positive man boards flight disguised as wife
6 days ago
Gary Lineker to host new ITV game show, Sitting on a Fortune
Next Page