Relive the most memorable moments on Ireland's road to Euro 2016

France is going to turn green next summer as Ireland take their place at Euro 2016 following an eventful qualifying campaign that started last September in Tbilisi.

Like all Irish qualification campaigns, this one hasn't been straightforward but there has been some truly memorable moments from Group D and the play-off win against Bosnia. Here's a quick recap.

Get in!: Aiden McGeady pops up with one of the most valuable goals in his Irish career. The control, technique and execution are all stunning here.

Get in!: Keano becomes the highest-scoring player in Euro qualifying history with a 13-minute treble against the minnows. It's going to be a long time before we see a player that's as prolific as him in the green jersey. Legend. 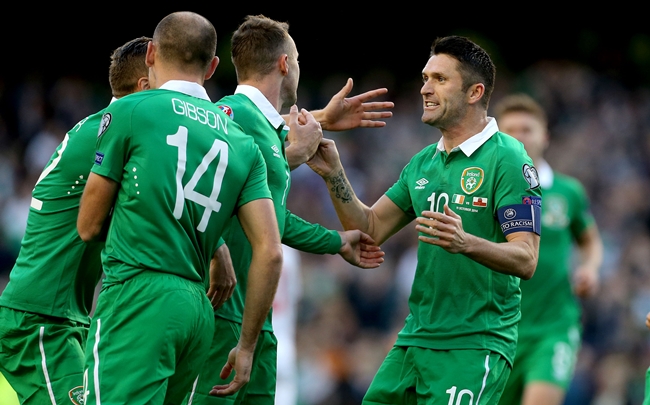 Week of Ireland vs Gibraltar and Germany.

Get in!: It takes a brave journalist to keep their phone on 'general' when Keane is doing a press conference. The account of why he didn't sign Robbie Savage is still one of our favourite things from the book. That seems like a loonnng time ago, doesn't it?

END_OF_DOCUMENT_TOKEN_TO_BE_REPLACED

Germany 1-1 Ireland, 14 October 2014 Get in!: Germany absolutely battered us in the opening half and took a deserved lead thanks to Toni Kroos' long range effort. What followed next will be remembered forever. A sublime piece of skill from sub Jeff Hendrick (he would do the same later) perfectly laid the ball across for John O'Shea to send the entire country into delirium. https://www.youtube.com/watch?v=qHDpdyvPWAs

Build up to Celtic Park Get in!: Roy Keane called the Gardaí after an incident at the team hotel in Portmarnock on Wednesday evening which took some of the attention away from the meeting with Scotland. Martin O'Neill also had to make a very awkward looking statement.

Scotland 1-0 Ireland, 14 November Get In!: Scotland were worthy winners on the night and Keane's death stare was probably the only other memorable thing.

Get In!: In a game that Ireland never deserved to lose, a familiar story was beginning to develop. Try, try and try but it seemed like we would get no reward for our efforts. Enter Shane Long. The Southampton striker came off the bench in the 84th minute and rescued a valuable point in injury time. 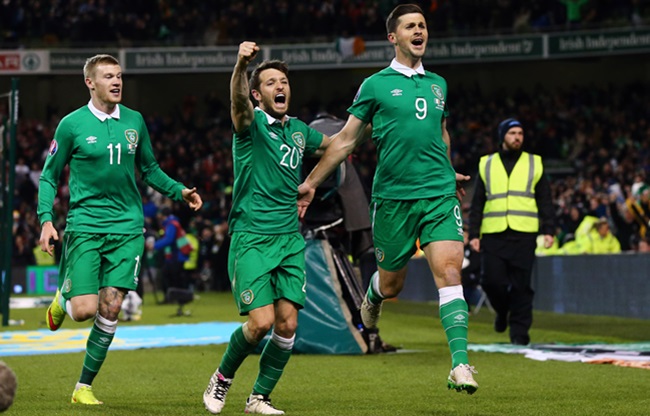 Get in!: Walters may have been offside for his goal but the o.g off John O'Shea was incredibly cruel. Martin O'Neill's decision to sub Wes Hoolahan, who looked like our most viable option for a goal on the day, only added to the air of frustration. France seemed a long, long distance away after leaving the Aviva on that particular Saturday. 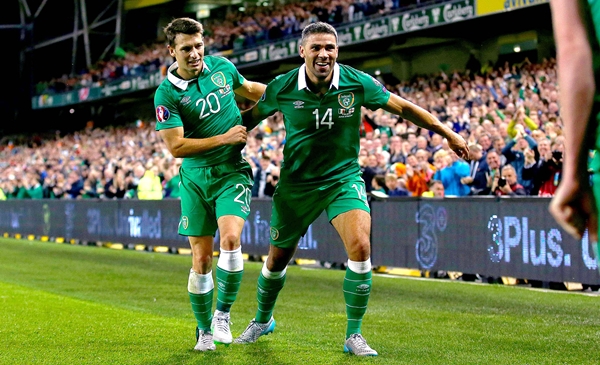 9) Valeri Qazaishvili, you're a great man.

Get in!: This night won't be remembered for Cyrus Christie's well taken opener against Gibraltar in a routine 0-4 win but rather the night that Ireland were thrown a Euro 2016 lifeline. This man is owed a pint in Ireland.

10) An amazing solo from Hendrick.

Get in!: This match was always going to be a nervy affair and it required an incredible piece of skill to fashion a goal. Hendrick the former St. Kevin's Boys man delivered yet again and Jon 'The Beast' Walters was more than happy to finish.

11) Aviva Stadium, we finally have lift-off.

Get in!: Football logic would dictate that the world champions would simply have to show up in Dublin and secure their qualification to France. Wrong! Ireland rallied and every single player worked their socks off in a famous win. We will NEVER get tired of seeing Shane Long's wonderful winner. Take it out Manuel Neuer.

After more than a decade of waiting, we had finally taken a 'big' scalp on our own soil when it really mattered.

The morning after Ireland beat the world champions

Get in!: A Garda car blasting 'Put 'em under Pressure' at 3am. This is what football does to our country.

13) A hangover in Poland

Get in!: Krychowiak gave the hosts an early lead before Jon Walters instantly drew us level from the penalty spot. Lewandowski scored what was presumably his 73rd goal in 18 games to secure Poland's place in France. The group didn't lie and we got what we deserved, a play-off.

Bosnia now await and these two matches are undoubtedly going to be nervy affairs but we believe in our lads. Get behind the team and as always, COYBIG!

14) The best goal we never saw

Get in! : All the talk in the build up to Ireland's first-leg against Bosnia and Herzegovina was about how the boys in green would struggle against the technically sound Bosnians. What was supposed to be a volatile cauldron of noise ultimately turned out to be the setting for Ireland's most assured away performance on the road to France. Truth be told, the match will be remembered for Robbie Brady's strike that nobody saw at the time.

Get in! : It's somewhat fitting that Jon 'The Beast' Walters scored the two goals that ensured our passage to France next summer because the Stoke City man has probably been our best performer in qualification.

There aren't enough words or platitudes to do him justice but this article should do the trick.

The Big Reviewski || JOE · TBR Spotlight: The Falcon and the Winter Soldier Episode Five - 'Truth'
popular
The 50 most iconic songs of all time* have been revealed
QUIZ: Can you answer all of Sinead and Daniel's questions on the Irish Celebrity Who Wants to be a Millionaire?
PICS: The man with the biggest penis in the world has one unbelievable problem with it
The JOE Music Quiz: Week 53
COMPETITION: WIN a 4K Blu-Ray box-set of the entire Game of Thrones series
QUIZ: How well do you remember the very first Game of Thrones episode?
The JOE Friday Pub Quiz: Week 239
You may also like
2 weeks ago
Martin Compston reveals moment he delayed Line of Duty filming to watch Scotland penalty shoot-out
1 month ago
EA Sports bans Irish FIFA player who racially abused Ian Wright for life
1 month ago
TOWIE star Mark Wright is officially the worst player on FIFA 21
2 months ago
Jamie Carragher reacts to hilarious TikTok remix combining on-air yelp with John Legend song
2 months ago
Roy Keane reacts to the dancing Keano FIFA TikTok meme
2 months ago
Watch the official trailer for Netflix's hotly anticipated Pelé documentary
Next Page