Pat Spillane will be squirming in his cosy pundit’s chair when he opens the Kerryman this week.

While you get a few pundits, on various outlets, defending the modern style of Gaelic football, the vast majority spend most of the time they should spend analysing the game giving out about the state of the modern game.

Yes, Pat Spillane is the most high-profile, and most vocal, member of this rose-tinted view of the past but he is by no means alone. The Gaelic football we watch today is very different from the game played even 15 years ago, and while there may be less kick-passing, and perhaps less fielding, in virtually every other way the game is better, faster and more professional.

END_OF_DOCUMENT_TOKEN_TO_BE_REPLACED

Due to tactical and physical advances you will get the odd defensive stinker but even the likes of Donegal and Derry earlier this year, which many derided, was a compelling game due to its intensity and competitive edge. At least for this observer.

Anyway, it is good to hear that at least one Kerry man likes modern GAA, and he should know as he plays it. Declan O’Sullivan, named at full forward for the Kingdom to face Cork on Sunday, has told the Kerryman newspaper that he quite likes the modern game and doesn't think the basic principles have changed

In quotes carried on Hoganstand, O’Sullivan says: "I am kind of enjoying the way football is. I know people are giving out that it is defensive, but look every team has to be defensive.

"When you don't have the ball you have to try and get it back and have to try to stop the other team from scoring and that's the way it always was.

END_OF_DOCUMENT_TOKEN_TO_BE_REPLACED

"To me, with Gaelic football there is a certain amount of talent, but anytime I talk to young fellas I say that talent gets you so far, but the most important attribute any player could have is attitude and work rate, and that's the way it always was."

Spot on stuff by O’Sullivan. We hope he goes into the punditry game when he hangs up the boots.

He might be one of the best footballer sin the country but it looks like Kevin McLoughlin may be about to switch sports, and we don’t mean to hurling, AFl or soccer.

It seems he’s a Quidditch fan, at least if this tweet is anything to go by… 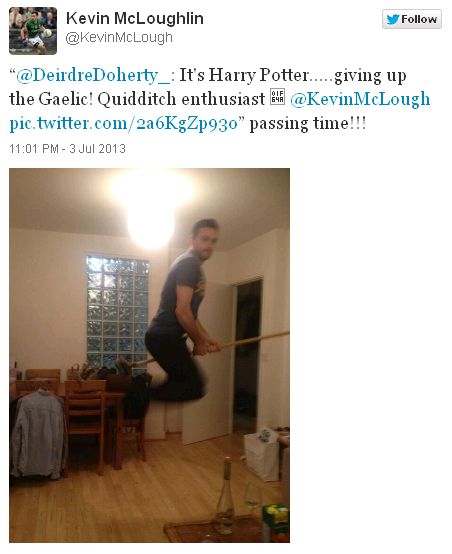 popular
The JOE Movie Quiz: Week 166
QUIZ: Test your skills to the limit with this General Knowledge Quiz
The JOE Friday Pub Quiz: Week 306
QUIZ: Can you score 12/15 in this difficult General Knowledge Quiz?
Family of Ashling Murphy share heartbreaking tribute at Fleadh Cheoil
Man in his mid-20s dies in two vehicle collision in Cork
One of the best Irish films of recent years is among the movies on TV tonight
You may also like
3 weeks ago
Looking for a hotel room for the All-Ireland Final weekends? It won't come cheap...
1 month ago
Taoiseach condemns "disturbing" fight at Galway v Armagh game
2 months ago
The 2 Johnnies share unbelievable catfish ordeal affecting over 40 people
2 months ago
Limerick hurler arrested following alleged altercation with Tipperary player in Limerick pub
3 months ago
Woman in her 20s dies after accident during Camogie match
9 months ago
Wicklow GAA to investigate fight after Under 15 match on Saturday
Next Page