"Liam Miller's legacy as a human being was that he was totally liked by everyone for his quiet, endearing nature."

45,000 people are expected to turn out to show their support for the late Celtic, Manchester United and Cork City midfielder, who passed away in February at the age of 36 following a battle with pancreatic cancer.

END_OF_DOCUMENT_TOKEN_TO_BE_REPLACED

The squads for the game were revealed on Monday, with Roy Keane and Martin O'Neill taking charge of a Manchester United/Celtic and Ireland Legends XI, respectively.

The game will be broadcast on Virgin Media Sport with proceeds, including all advertising and sponsorship revenues, going to the Liam Miller Fund, which will be used to help Liam's wife Clare and their three children as well as Marymount Hospice and other charities.

With kick-off on the horizon, Alex Ferguson, who managed Miller at Old Trafford between 2004 and 2006, has penned a few words ahead of the occasion.

The late Liam Miller loved scoring this goal for us in the @EmiratesFACup back in 2005.

We're thinking of him and his loved ones ahead of today's tribute match. pic.twitter.com/fGh5jWleDk

END_OF_DOCUMENT_TOKEN_TO_BE_REPLACED

"It is with reluctance and considerable disappointment that I will not be in Cork for today's tributes to our former player at Manchester United, Liam Miller," Ferguson begins in the official match programme.

"Liam was a United player in the 2004 - 2005 season, and he didn't let us down. He was a popular lad with players and staff. The number of appearances he made was limited, and not what Liam or I had expected.

"When I went to the Celtic v Anderlecht Champions League tie in Glasgow in November 2003, it was to watch Belgian defender Vincent Kompany. However, my attention soon gravitated to Celtic's energetic young midfielder, slight of stature but with an assured, calm way about him. 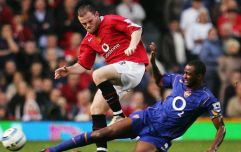 END_OF_DOCUMENT_TOKEN_TO_BE_REPLACED

"What I witnessed was a player with a tremendous set of midfield fundamentals - his movement off the ball, his penetration of the Anderlecht midfield. I came away smitten by his performance, not least the timing of his runs."

Ferguson notes that upon leaving Parkhead that night he was "determined" to get Miller to sign on the dotted line and take his place at the Theatre of Dreams.

He describes how United and Celtic's previously great relationship was somewhat strained by his pursuit of the midfielder, but thankfully the bad feeling didn't last too long.

"Miller the man flourished at United," continues the legendary manager.

"He was a wonderful young man, with humility and manners admired by myself and all at the club.

"Liam Miller's legacy as a human being was that he was totally liked by everyone for his quiet, endearing nature.

"I wish his lovely family every strength and happiness in the future."

popular
5 years ago, Hollywood took a massive gamble on a huge sequel... and lost big time
Netflix has just added 12 very big movies to their library
One of the most underrated crime thrillers of recent years is among the movies on TV tonight
Tom Hardy set to play Hannibal Lecter-type serial killer in new series
Netflix backtracks on anti-password sharing measures following user outcry
Guy Ritchie's new war movie looks like it'll be a very emotional watch
The 50 most iconic songs of all time* have been revealed
You may also like
8 months ago
BBC trainee accidentally posts message mocking Man United live on TV
1 year ago
COMPETITION: WIN a copy of Eric Cantona's new Manchester United documentary, The United Way, on DVD
1 year ago
Manchester United documentary written by Eric Cantona available to watch at home in Ireland this May
2 years ago
Marcus Rashford launches book club to help kids experience 'escapism' of reading
2 years ago
Paul Pogba releases powerful statement in response to 'fake news' from The Sun
2 years ago
The JOE Pub Quiz: Week 214
Next Page