Tributes have been pouring in from all corners of the world for Nelson Mandela and the All Blacks paid their respects for the South African with a touching message.

Mandela will be remembered as one of the most influential leaders of the last century, a driving force of change in a country with huge social problems.

His gesture at the 1995 World Cup, donning the Springboks jersey while acknowledging Francois Pienaar as the winning captain has been lauded as one of sport’s most iconic moments.

The All Blacks, who were beaten in that World Cup Final, and traditionally one of South Africa’s fiercest rivals, used their official Facebook page to pay a fitting tribute to Madiba yesterday. 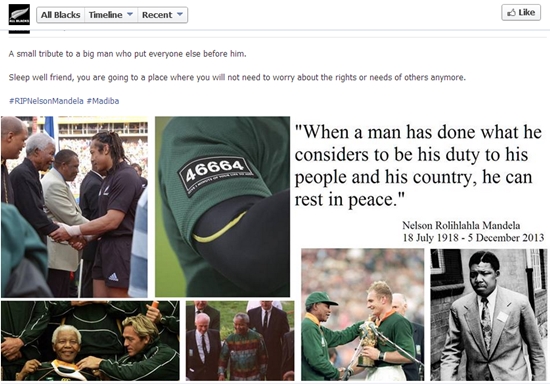 House of Rugby Ireland · Quinn Roux on finding a home in Ireland and Mike McCarthy brings the absolute HEAT!
popular
QUIZ: The JOE Music Quiz: Week 41
The JOE Friday Pub Quiz: Week 227
20 of the best comedies to watch on Netflix right now
Yewande Biala releases statement discussing racism on Love Island
Gardaí warn of scam targeting AIB customers
Bernie Sanders is using his inauguration meme to raise money for charity
The 50 most iconic songs of all time* have been revealed
You may also like
3 weeks ago
Ian Keatley on Ronan O'Gara's deadpan advice and his most treasured Munster jersey
1 month ago
Springboks legend must have the greatest jersey swap collection in rugby
1 month ago
'Players, after games, are reading the most toxic stuff being written'
1 month ago
Johnny Sexton made a class post-match gesture after Ireland's win over Wales
2 months ago
Former England star Ugo Monye opens up on harrowing experience with racism
2 months ago
Lions star on Daniel Craig's post-match gift, worthy of 007 himself
Next Page