Be inspired, with some of the most famous Haka responses

Lidl want you to create an Irish Haka, so here's a few well known responses to the original.

As we told you here, the good folks at Lidl are looking for you to create an Irish-style Haka video with your school or club and send it to them. The best entries are in line for some cool prizes, including €2,500 to kit out your club'.

So we thought it would be a good idea if we tried to inspire you into action. And rather than show you loads of fierce intimidating All Black Hakas, we thought a look at some of the best responses from around the world to the famous war dance would be better.

END_OF_DOCUMENT_TOKEN_TO_BE_REPLACED

So, without further ado, here's some of the best.

Richard Cockerill loses the head in 1997, pays the price

Cockerill faces up to Norm Hewitt, a move which England captain Martin Johnson, no stranger to pre-match shenanigans himself, reacts to with: "What the f*ck have you done?" The All Blacks go and thump England 25-8.

Responding with their own dance, the sipi tau, might be the best response of all.

Think you can do better, prove it! Just click here 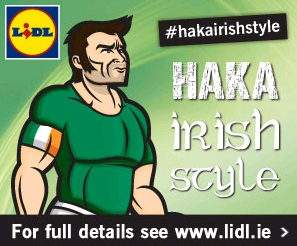