Robbie Henshaw had not played much at outside centre for Leinster but that is all changing, and quickly too.

The Ireland international would prefer, truth be told, to play No.13 but he has been more than happy to step to inside centre to accommodate Garry Ringrose in blue and green jerseys. With Ringrose still out of contention after a shoulder injury, Henshaw is getting a run at 13.

Heading into the November internationals, many were speculating on who would play outside centre against South Africa. Jared Payne seemed the likely option but he has not played since suffering tour-ending migraines while on duty for the Lions. Luke Marshall is next man up [Chris Farrell has potential] but Henshaw looks to have solved that one.

END_OF_DOCUMENT_TOKEN_TO_BE_REPLACED

That leaves the No.12 jersey to fill and the leading candidates were discussed on The Hard Yards podcast by former Munster, Connacht and Ireland centre James Downey [from 26:00 below].

Hard Yards host Andy McGeady is of the mind that Connacht's Bundee Aki will get at least one, if not two, opportunities to renew his former midfield partnership with Henshaw.

"A lot of people think, myself included, that he has some extra traits that he can use, rather than being used as a bludgeoning centre and carrying. Those traits were wasted a bit at 12 and that he could easily move out. He has the skill-set to do it - very soft hands and he's quite an intelligent player.

END_OF_DOCUMENT_TOKEN_TO_BE_REPLACED

"There is a question mark about [midfield] now as Garry is out and it looks to be Aki at the moment, to be honest... He's good to go from November so it will be interesting to see how it goes."

Downey added, "You listen to Rory Best talk about how important combinations are and it is comforting, not only for Bundee but for Robbie, that he goes, 'Right, I'm used to playing with Robbie and I know what he does'... You have to know the intricacies of the other guy and what he'll do - what line he'll run. That doesn't just come in two or three weeks.

"I reckon that if it is going to be the two of them, they'll be paired up in one of the earlier games [South Africa or Fiji] just to get used to it but if they do pick Bundee, it will be with Robbie." 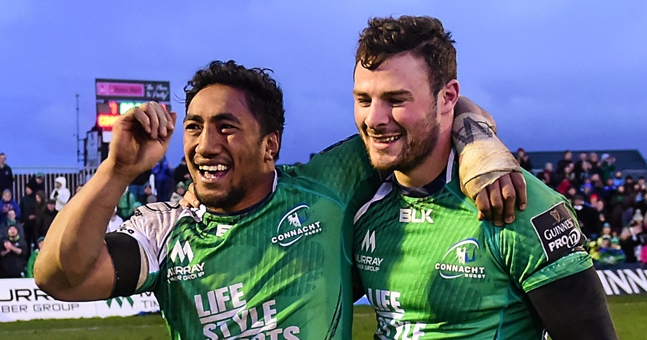 END_OF_DOCUMENT_TOKEN_TO_BE_REPLACED

While Aki is right in contention for that 12 jersey, there are three other options, including one we would love to see back in the green jersey.

Marshall can play in the 12 role too, although he is often used as an outside centre for Ulster. Rory Scannell of Munster made his Ireland debut during the summer tour to America and Japan. He is a goal-kicking option too, which may shade it for him in terms of matchday 23 selection at the very least.

Our preferred option is to team Henshaw up with big, dangerous Ulster centre Stuart McCloskey. At 6-foot-3 and over 17-stone, McCloskey is that bludgeon that Downey spoke of but he also possesses superb attacking skills and offloads very effectively.

"I'm a big fan of McCloskey and I have him on my list," said Downey. "He brings something different. Rory Scannell is more of a distributing, ball-playing 12 but McCloskey brings a bit of directness... You can have your wingers feeding off him as well and, the way he's playing, he gets his offloads away. As a winger or centre, if you know he can get his hands free, there's a chance.

"Once you get in behind [a defence] then it's about reading what's in front. Even as a decoy, he can create space. He's an underused asset that we have."

McCloskey has only one cap for Ireland - against England in 2016 - but we feel this November's Guinness Series could provide the perfect chance to give the big guy another crack.

popular
QUIZ: Can you name all the counties in Ireland without the letter 'E'?
Road Safety Alert issued as high temperatures continue across Ireland
Nearly 100 flights delayed at Dublin Airport on Monday
WhatsApp introduces way to choose who can and can't see you're online
QUIZ: Can you get top marks in this short but tricky Irish geography quiz?
RTÉ tries to solve Michael Collins murder in new documentary
Public urged to conserve water as around 60 areas at risk of supply shortages
You may also like
3 days ago
QUIZ: Can you name all the counties in Ireland with an ‘N’ in their name?
1 week ago
QUIZ: Can you name the county that each of Ireland's 10 highest mountains are in?
1 week ago
Take a Hike: Crone Woods and Maulin Mountain loop
1 week ago
Apple TV+'s next big show is an Irish murder mystery
2 weeks ago
61 new speed camera zones to come into effect in Ireland today
3 weeks ago
Gogglebox Ireland are looking for very particular people to join the new season
Next Page