Burning Issue: Who should Joe Schmidt name as Ireland captain?

Joe Schmidt's first major task as Ireland coach is to name his captain ahead of the Autumn internationals? Should he stick with Jamie Heaslip, or pass it to a man with more experience? Three JOEs battle it out.

END_OF_DOCUMENT_TOKEN_TO_BE_REPLACED

Sean Nolan says... It might be a sentimental choice, but wouldn’t it be great to let Brian O’Driscoll have the job in his final season?

Sport, especially professional sport, has little room for sentiment. Players play, they retire, the game and the teams they play for move on, creating new terrace heroes. This is the natural order of things, like a David Attenborough documentary, but with a lot more hair and violence.

However, if ever an Irish sports person deserved to buck that trend it is Brian O’Driscoll. The lads on Second Captains jokingly referred to retiring the No 13 shirt, so hard will he be to replace in the Irish set-up and I would almost support such a move.

END_OF_DOCUMENT_TOKEN_TO_BE_REPLACED

I will never see a player as good as him in my lifetime, and we should all thank whatever god you fancy that we were around to see him. Thankfully, we all get one more year to enjoy BOD in action, and it starts with the November international series.

He may or may not start against Samoa but fitness permitting he is a cert to play Australia and his old nemesis New Zealand. How perfect would it be if the man who captained Ireland so many times was given the job for a final lash at the southern powers?

O’Driscoll has spoken more than once about how beating the All-Blacks is one of his remaining goals and surely that result, difficult and all as it would be to achieve, would be even sweeter if he led the team out that day.

I’m sure my esteemed colleagues will make cogent arguments for their men. Jamie Heaslip is younger, and with an eye to the World Cup, a sure thing to be there. He’s also the incumbent, a hugely important factor.

END_OF_DOCUMENT_TOKEN_TO_BE_REPLACED

Paul O’Connell, another colossus, is easily the most natural leader in the group and with the burden of the Munster captaincy off his neck, he might fancy another lash at the Ireland gig.

But these entirely reasoned, well-thought-out arguments have no place in a season like this. This is Brian O’Driscoll’s last season. He may have expressed his desire to not mark his remaining months with thoughts about the last time he will do this, or that, or play this team or that team but as fans we will. It’s only natural.

And allowing that most unnatural of things, sentiment, to seep in for this year alone is fine by me. Give BOD the job, let him leave the stage as the leading man.

Conor Heneghan says... As far I can see, appointing Jamie Heaslip as captain for the November Internationals is almost a no-brainer for Joe Schmidt.

It might have been a big deal for Heaslip to be given the captaincy ahead of Leinster colleague Brian O’Driscoll before the Six Nations but it wouldn’t be now and in the interests of stability and continuity, surely it is best to stick with him. There is no room for sentiment in sport but how big of a blow would it be to Heaslip – one of Ireland’s main players – if he was to be demoted from the role and become one of the shortest-serving Irish captains of all time?

Declan Kidney might not be Ireland coach anymore but he had the right idea when appointing Heaslip as captain at the start of the year, even if he went about it rather clumsily and provided Brian O’Driscoll with what was to be the first of two major disappointments in 2013.

Ireland were and to a great extent still are in a transitional period from the golden generation and Kidney wanted a man who was going to be around for years to lead the new team into a new era and more specifically, the World Cup in 2015. Brian O’Driscoll certainly won’t be around for it and there’s a good chance that given his age and injury record that Paul O’Connell mightn’t be either.

Those two have been magnificent captains for Ireland but it’s Heaslip’s time now. Besides, it’s not as if we’re talking about a callow and inexperienced young fella here; Heaslip has played 57 times for Ireland, has been on two Lions tours, has captained his province on numerous occasions and now his country too. He’s ready to assume the role in the long term.

Heaslip will turn 30 in December and the signs suggest that he is playing as well as ever; he might not make the devastating impact that, say, Sean O’Brien can make at times but he’s remarkably consistent, usually turning in a seven or eight out of ten performance and reliability is an important trait as a captain.

The captaincy appeared to affect him in his first couple of games in the role but any judgements on Ireland’s Six Nations campaign have to come with an asterisk representing the ridiculous bad luck we had with injuries. Remember Peter O’Mahony playing on the wing in Rome anyone?

Since then, he played a big role in a successful Lions series – he was dropped for the final test, something that was overlooked because of the, eh, low-profile omission of a certain Leinster and Ireland team-mate – and has been in good form for Leinster since.

He still manages to rub a lot of people up the wrong way (regardless of how modern the game has become, there’s something not right about an international captain attending the coin toss while wearing a pair of Beats by Dre headphones) but by all accounts, he is one of the most professional operators around, something emphasised by Johnny Sexton in his recent book.

With Joe Schmidt overseeing a new era in Irish rugby, the emphasis should very much be on the future as well as the present and Heaslip is representative of both. The right decision would be to hand him the captain’s armband for the Samoa game and particularly the games against the Wallabies and the All-Blacks and I expect that will be the case.

Declan Whooley says... While the captaincy issue is likely to be more of an issue in the media – guilty as charged – than perhaps it will be among the players itself, Joe Schmidt is facing his first big decision as Ireland head coach. And if he is looking for a proven leader, well, there is one man who stands head and shoulders above all others. And we’re not talking about Devin Toner.

We will hear the usual lines trotted out about how a team needs 15 captains, and that it perhaps doesn’t hold the same importance it once did, but the leader of the team plays a key role with his team-mates, the opposition and the referee. And when you mention the word leader, has there ever been a better exponent of that word in Irish rugby terms than Paul O’Connell?

That is, of course, a rhetorical question, but for many reasons, which I will elaborate on, the Chuck Norris of the rugby world is the ultimate captain material. Not that we are short a few contenders.

Some will argue that Jamie Heaslip should be allowed keep the armband for continuity purposes, but will that matter if Ireland and the Leinster back-rower put in below-par performances? And while he has been solid in the role, it appeared last year that Rory Best would have been given the role had injury not got in the way and he would be a popular choice within camp.

And of course there is BOD, in what is his last season in the green jersey. He has worn the skipper’s armband with distinction, but would he really want it? Of course he wouldn’t say otherwise, but with only a few games left, perhaps all the duties that come with it might not be too appealing.

For me – to quote every sports pundit when asked a question – it has to be O’Connell. Commanding respect of your team-mates is the first requirement and that won’t be an issue. The man who Martyn Williams described after the Lions tour in 2009 as the best captain he had ever worked not only has the respect of his peers, but crucially, the opposition. 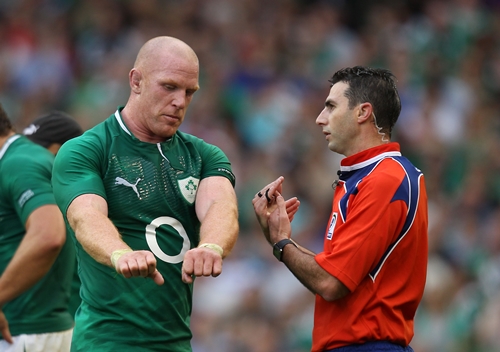 When big decisions need to be made against Australia and New Zealand, and next year in the Six Nations, who better to be encouraging the troops? Who better to be in the word of the referee when a 50/50 call is about to be made? Richie McCaw has made it something of an art-form and O’Connell is one of the select band of players in the world that would rival the flanker in terms of influence.

He hasn’t played a whole pile of rugby in the past two years and will be itching to get a run of games in green and as we saw for Munster at the tail end of last season, can have a transforming effect on the team.

Those championing Heaslip’s case have been pointing to the fact we need to be building for the World Cup, with BOD definitely not around for 2015 and injuries could hamper O’Connell by the time it rolls around. I would prefer to concentrate on the here-and-now rather than worry about a tournament two years away.

I would prefer to give ourselves the best chance of building a solid platform, with our best players in the team and our best leader – Mr. O’Connell – with the armband.

The qualities of the other candidates are not in doubt, and will all be in the team with important roles to play. But for the betterment of the team, Paul O’Connell as captain is a must. Anyone else bellowing about “putting the fear of God” into the opposition just wouldn’t be the same.

popular
QUIZ: Test your knowledge with this Ultimate Friends Character Quiz
Details of cash payments and Christmas bonus outlined in Sinn Féin’s alternative budget
The JOE Friday Pub Quiz: Week 313
House Of The Dragon is already better than Game Of Thrones
A brilliant psychological thriller is among the movies on TV tonight
One of the best films nobody went to see turns 15 years old this week
Amazon Prime Video has just added 20 very big movies to its library
You may also like
1 week ago
Iconic rugby commentator Eddie Butler dies aged 65
6 months ago
Scottish Parliament official dies during rugby game in Dublin
7 months ago
Every Guinness fan needs to try these brand new experimental beers
7 months ago
"Samaritans saved my life" - Brent Pope praised for honest interview on Tommy Tiernan Show
1 year ago
Craig Casey and Johnny Sexton combination backed for Italy clash
1 year ago
Defence grows for Billy Burns after one of the roughest days of his rugby career
Next Page