Cathal Pendred is a new breed of athlete on the cusp of something very special.

The 25 year old Dubliner played rugby in his youth with the likes of Cian Healy before turning his sights on a relatively new sport called Mixed Martial Arts. Now, he's on the brink of something that is about to explode in a big way...

“I was just saying to Jerry Flannery tonight at the JOE shoot, when I got into it f**k all people knew what I was doing,” Pendred says.

END_OF_DOCUMENT_TOKEN_TO_BE_REPLACED

“They thought I was in the WWE or something. But now they're coming up to me on the streets and saying they're fans.”

It's no surprise really. Pendred, although laid back and amiable in person, has an intensity in the cage that few other fighters can match. Just ask former UFC heavy hitter Che Mills who he dismantled with ease this passing weekend at Cage Warriors 55, where Pendred stopped him in the third round. 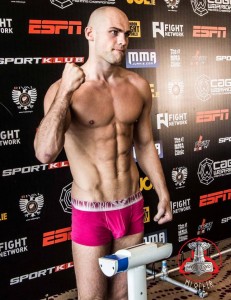 END_OF_DOCUMENT_TOKEN_TO_BE_REPLACED

“Joe Rogan called him one of the best strikers in the Welterweight division.”

Pendred, though, like a true champion, still doesn't seem happy with his performance.

“I wanted to take him in the second,” he says, “just like Rory McDonald did... and all I needed was ten more seconds to do that.”

Mills, though a four time UFC veteran, still didn't make weight for his 77 kilo Welterweight scuffle – turning the planned five-round fight for the belt into a three-round affair and having to give up 25
percent of his purse as punishment. 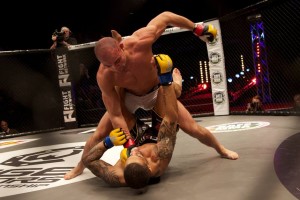 END_OF_DOCUMENT_TOKEN_TO_BE_REPLACED

Pendred had no such issues cutting weight and even has an unusual sounding process he uses to cut from his walk around weight of 90 kilos down to the 77 required to fight.

“I do this thing called water loading,” he tells us, “where I drink about ten litres of water a day five days before the fight.” How the hell does that work?

Pendred laughs, “It gets the body used to urinating every hour and when you stop drinking water a couple of days before the weigh in you still have some in your system so you keep urinating... so basically you piss yourself down to 77,” he says, again cracking up.

It must be tough, though. If not on him, then on his family and friends?

“Yeah” he concedes with a wry smile, “my friends and family know not to mess with me the week before a fight. I get awful grouchy but you get used to it. Ultimately it's experience and the more times you do it the easier it gets.”

There have been rumours since before Pendred convincingly destroyed Che Mills that the bright lights and big bucks of The UFC beckoned, but the humble Dubliner, while hesitant to confirm anything, is still adamant he still wants to fight on that Boston card alongside his SBG team-mate Conor McGregor.

News impending maybe? “I hope so,” he says but underlines that he “still hasn't heard anything.”

When times are tough Irish people generally turn to our sport stars for inspiration... frankly, they'll find few as articulate and focused as Cathal Pendred.

popular
Jeffrey Dahmer’s dad thinks he knows what’s to blame for son becoming a serial killer
Prince George reportedly told classmate "my father will be King so you better watch out"
Two new 24-hour bus services are coming to Dublin
Budget 2023: Cigarettes going up, energy credits announced, child and social welfare increases confirmed
An underseen disaster film is among the movies on TV tonight
QUIZ: Test your knowledge with this Ultimate Friends Character Quiz
CONFIRMED: Renters to benefit from €500 tax credit as part of Budget 2023
You may also like
1 month ago
Conor McGregor to make film acting debut in Road House remake
2 years ago
Conor McGregor responds to Paschal Donohoe’s calls to encourage social distancing amongst Irish public
3 years ago
"I was in the wrong" - Conor McGregor apologises over incident in Dublin pub
3 years ago
Charges dropped in Conor McGregor phone-smashing case
3 years ago
WATCH: New footage released of Conor McGregor allegedly smashing fan's phone in Miami
3 years ago
Leo Varadkar and Conor McGregor lead the way in Chicago St. Patrick's Day parade
Next Page