This should get you in the mood for the week of racing ahead.

As we're sure you're aware, Cheltenham Festival kicks off next week, and anyone with even a faint interest in horse racing is counting down the minutes.

And if you're trying to get even more excited for the week of madness, then this video is surely the one for you. 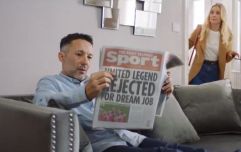 END_OF_DOCUMENT_TOKEN_TO_BE_REPLACED

Chances are you'll recognise the familiar face of Conor Moore from JOE, where he has done spot on impressions of everyone from Ger Loughnane to Matthew McConaughey.

In this video, we see him play characters like Willie Mullins, Michael O'Leary, Ruby Walsh and way more.

Ahead of Cheltenham next week, we asked the great @ConorSketches to work his magic on some of the biggest names in horse racing... pic.twitter.com/X0Oy6H0ckk

popular
QUIZ: You'll do well to get 100% in this General Knowledge Quiz
Disney+ has just added 10 big movies to its library
Gardaí urge public not to share "upsetting" pictures of fatal assault of Paul 'Babs' Connolly in Westmeath
25 years ago, Sylvester Stallone delivered his best performance in a hard-hitting crime drama
FBI release findings of Rust investigation after shooting of Halyna Hutchins
QUIZ: You'll need to be razor-sharp to get 100% in this General Knowledge Quiz
The JOE Friday Pub Quiz: Week 307
You may also like
2 years ago
WATCH: "Some of the biggest names in GAA" give their thoughts on the All-Ireland final
3 years ago
PICS: Paddy Power builds ‘Donald Plaza’ in Clare to mark the arrival of Donald Trump in Ireland
3 years ago
WATCH: Rhodri Giggs responds to the news that his Paddy Power advert has been banned
3 years ago
Paddy Power unveil savage full-page Brexit ads in two British newspapers
3 years ago
Paddy Power and Boyle Sports suspend betting on Airtricity League clash due to unusual betting activity
3 years ago
Take our survey to be in with a chance of winning a luxury hotel stay
Next Page