Ireland is punching very far above its weight...

Those clever folks over at Sporting Intelligence (@sportingintel) have put together this map to represent the different nationalities in Premier League squads ahead of the new season.

Ireland has a very creditable 29 representatives, more than anywhere else bar England, Spain and France. 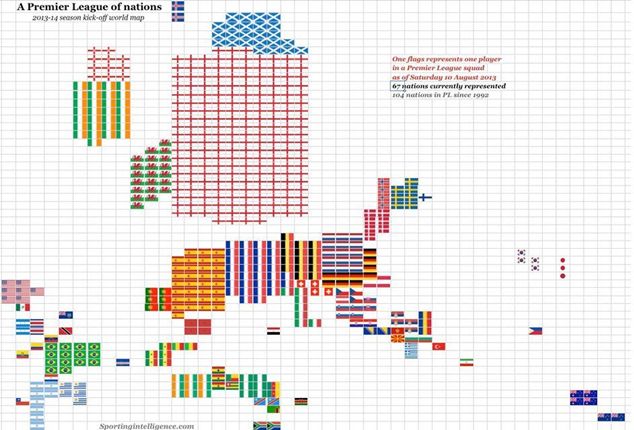 It’s an excellent way to show off what could be some rather dull numbers. Nicely played, as always, by Sporting Intelligence.

The Big Reviewski || JOE · The Big Reviewski with Y: The Last Man, that Malignant ending & a secret streaming service
popular
One of the most-anticipated movies of the last few years is finally available to watch at home this week
The 50 most iconic songs of all time* have been revealed
PICS: The man with the biggest penis in the world has one unbelievable problem with it
Government announces special €1,860 payment for laid-off workers during pandemic
It looks like Garth Brooks will play FIVE nights in Ireland after all
Gardaí warn of scam involving "inappropriate or sexual images" after young boy blackmailed for money
Simon Harris and wife welcome arrival of new baby boy
You may also like
3 weeks ago
Manchester City's Benjamin Mendy charged with four counts of rape
1 month ago
Michael Ballack’s son Emilio, 18, dies in 'quad-bike crash’
1 month ago
Five football documentaries to watch to kill time before the new Premier League season
3 months ago
Christian Eriksen shares first update from hospital as he undergoes tests after cardiac arrest
3 months ago
Christian Eriksen stable but may not play football again, says sport cardiologist
4 months ago
Ryan Giggs charged with assaulting two women and controlling or coercive behaviour
Next Page