John Cena is the kind of guy that most people would not want to mess with.

Conor McGregor, as we're all very well aware, does not fall under the category of 'most people'. The MMA has inflamed the passions of various wrestlers recently after he claimed he'd 'slap the head off' the entire WWE roster.

He's now taken it further and made it personal with one of the WWE's most recognisable faces, one John Cena. 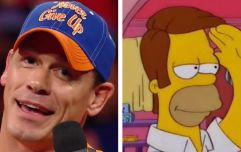 END_OF_DOCUMENT_TOKEN_TO_BE_REPLACED

During a media day in Las Vegas ahead of next week's fight with Nate Diaz, McGregor called out Cena, saying:

"What's the main guy? John Cena? He's 40 years of age walking around in a luminous orange t-shirt and headband talking about no one can see him.

You can see him right there — he's a big fat 40 year old failed Mr. Olympian. Do you know what I mean? They're dweebs those guys."

Cena appeared to respond through his Twitter account, simply sending a subtle message that "Achievement often breeds contempt. The more you achieve the more contempt you will see."

Achievement often breeds contempt. The more you achieve the more contempt you will see. Stay focused on you and moving forward. #NeverGiveUp

popular
5 years ago, Hollywood took a massive gamble on a huge sequel... and lost big time
Netflix has just added 12 very big movies to their library
One of the most underrated crime thrillers of recent years is among the movies on TV tonight
Tom Hardy set to play Hannibal Lecter-type serial killer in new series
Netflix backtracks on anti-password sharing measures following user outcry
Guy Ritchie's new war movie looks like it'll be a very emotional watch
‘Older’ woman who took Prince Harry’s virginity gives her side of the story
You may also like
5 months ago
An underrated John Cena comedy is among the movies on TV tonight
7 months ago
WATCH: John Cena makes dream of teen fan who fled Ukraine come true
10 months ago
QUIZ: Can you name the winner in these famous WrestleMania main events?
2 years ago
WrestleMania is still going ahead, just not as we know it
3 years ago
John Cena in, The Rock out for Fast and Furious 9
3 years ago
John Cena in talks to join the Suicide Squad sequel
Next Page