Cork City scored a very late winner to win the FAI Cup Final tonight, beating Dundalk 1-0 after extra time. Sean Maguire scored the winner for the Cork side in the last minute of extra time.

After last years events, in which Dundalk beat Cork 1-0 after extra time, and the success Dundalk have had this season, Cork had their work cut out for them. 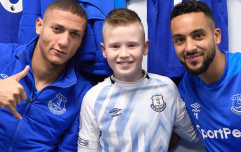 END_OF_DOCUMENT_TOKEN_TO_BE_REPLACED

It was a close game with both teams having chances, with the winner being a scrappy goal from a long throw in. Twitter went wild over the last minute winner.

You can watch the exuberant scenes following Maguire's winner shot from the perfect angle from the Aviva stands.

House of Rugby Ireland · Munster's nail-biting win, European games in doubt and Darren Cave interview
popular
QUIZ: Can you name the Marvel Cinematic Universe film from just a single screen shot?
QUIZ: Can you pass your driving test and guess the meaning of all these road signs?
The JOE Movie Quiz: Week 85
The JOE Friday Pub Quiz: Week 226
QUIZ: Can you recognise each of these iconic Dublin pubs?
QUIZ: Can you correctly identify these European country flags?
QUIZ: Name all the countries of the EU that contain 2 vowels or less
You may also like
1 week ago
Cork Port evacuated after major fire breaks out
1 week ago
Gardaí intervene at 100-person party in Blarney
2 weeks ago
Investigation launched after man's body found in Cork
4 weeks ago
Gardaí intervene following "disgraceful gathering of persons" in Cork
1 month ago
€10.7 million lotto win still not claimed in Cork
1 month ago
Lotto players urged to check tickets after someone won €10.7 million
Next Page