With the help of some very well-known eircom ambassadors, one of the GAA heads in the JOE office tries to restore some pride after some dodgy predictions last weekend.

Ahead of a monster weekend in the football championship last weekend we said we’d be happy enough with a 75 per cent return from our predictions in the eircom Win, Lose or Draw game, but in the end we had to settle for 66 per cent thanks to London, Meath, Fermanagh and Longford rubbing egg in our faces.

If a gambler gave up after one bet went wrong there wouldn’t be many gamblers around so, with wounded pride, we’re putting our necks on the line once again to predict the winners of the various qualifiers taking place over the next couple of days, as well as the none too insignificant matter of the Munster Football Final in Killarney.

END_OF_DOCUMENT_TOKEN_TO_BE_REPLACED

Like us, you may have taken a bit of a hit in the JOE Win, Lose or Draw league table and if by some miracle you haven’t already entered it via the experience more website, click on this link, enter the code CTYVG and you’ll soon be going head to head with the big (and not so big) dogs.

Now, without further ado and with the usual expert insight from our high-profile eircom ambassadors, here’s how we think this weekend’s games are going to go down.

A four-point win over Tipperary won’t have Galway fans shouting from the rooftops or anything but it was their first win in the qualifiers in donkey’s years. Now, a meeting with a Waterford side who struggled just as badly against Kerry as Tipp did in Munster is arguably the perfect opportunity for the Tribesman to build even more momentum through the back door.

Waterford held Kerry for a half last time out but they’ll need to show more ambition in Pearse Stadium if they’ve any hope of causing an upset. With home advantage, we fancy Galway to win at a canter.

END_OF_DOCUMENT_TOKEN_TO_BE_REPLACED

Ordinarily you’d fancy Laois, who were in Division One and an All-Ireland quarter-final last year, to progress against the Munster minnows, but Laois, like Clare, know all about the Micko factor and his ability to cause a shock in the qualifiers.

Having to play in Ennis is a further handicap for Laois but they should still be too good for the Banner men, especially if they can get anywhere near to the 3-13 they put on the scoreboard last Friday night.

These two sides delivered the best game of the Championship so far in Celtic Park last month and having won that game, Down will have no fears about going to the same venue this weekend.

END_OF_DOCUMENT_TOKEN_TO_BE_REPLACED

Having changed tactics in defeat to Donegal, it will be interesting to see if James McCartan allows his side to be as open as they were against Derry first time out and we suspect that he won’t and the same goes for Brian McIver in the home dugout. As a result, it mightn’t be as good to watch as the first game but we expect the same end result. 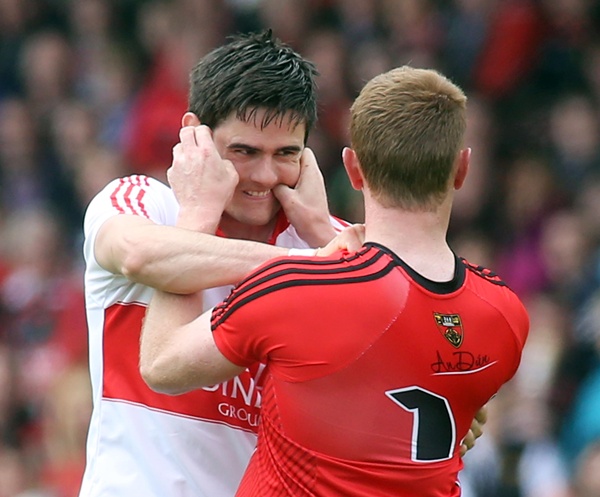 Donegal captain Michael Murphy knows all about Down having been on the end of a narrow win with Donegal a fortnight back and he thinks James McCartan’s side will get the better of the Oak Leafers for the second time this summer.

“Obviously Derry have a wee bit of momentum coming off the back of the Sligo game but having played Down ourselves, I’d have to go with them again,” Murphy says.

“I can see them really bouncing back after the Ulster Championship and taking a lot of positives from our game with them.”

Tyrone manager Mickey Harte, meanwhile, has some views on the quirk of the draw pairing two sides against each other who have already met in the Championship.

“We’ve been down this road before where you couldn’t meet a team if you’d met them before,” he says.

“I think the latest rule is you can’t draw someone you’ve just played in the most recent match. After that you can meet anybody but it is completely luck of the draw. No one could have predicted you’ve had a replay of two matches which have already happened.

“If you start to bring in these variables, then you almost don’t have a draw at all because you’d have so many teams who can’t play each other. You almost wouldn’t need a draw by default. I think I’d just leave it to chance.”

Can a Roscommon brother get a break? First of all, they lose heavily to Mayo in Castlebar and now they have to follow it up by taking on a Tyrone team that opened a can of whup-ass on Offaly and won by 22 points last weekend.

The two sides are well familiar with one another at this stage having met in the qualifiers in the last two seasons and history and form suggest that Roscommon will do well to avoid a repeat of the 11-point defeat they suffered on both occasions.

Tyrone look too good for John Evans’ men and the momentum they’re building through the qualifiers will be a concern for some of the bigger teams who will be waiting a little further down the road. A comfortable win for the Red Handers as far as we can see it.

Roscommon forward Donie Shine, on the other hand, doesn’t expect it be as one-sided.

“Our third year in a row and probably the toughest draw that was in the bowl,” Donie observes.

“It’s at home in The Hyde and we’ll give it a rattle. They’re one of the top teams we’ve played in the last few years and we’ll certainly look to be more competitive.

“Last year Tyrone beat us by a bigger margin than we would have liked and we’ll be trying to narrow that this year. I’m sure Mickey will be predicting Tyrone for this one in ‘Win, lose or draw’ so there’s a couple more points for me if we do the job on Saturday!”

No offence to Limerick, Clare, Waterford and Tipperary, but the Munster football Championship only really starts this weekend. Neither side can read anything into their run-in to Sunday’s decider in Killarney but don’t be fooled into thinking that it will affect the intensity that either party will bring to the table this weekend.

From being written-off as an ageing team not long ago, many pundits fancy Kerry to have a right rattle at Sam under Eamonn Fitzmaurice while on the other hand, Cork may well benefit from what we would wager is their most low-key campaign under Conor Counihan to date.

Both sides will be going all out to win this one, but it’s not a disaster for either to lose; barring a miracle or an incredibly tough qualifier draw for the loser they’ll both be in Croke Park in August.

There are shades of mixing the old with the new on both sides, but as Darragh O’Sé alluded to in his Irish Times column earlier this week, Kerry are probably that bit further down the road in terms of the new path they’re taking and that should be enough to see them through, albeit with only a couple of points to spare.

Kerry captain Colm Cooper is naturally expecting a tough test, but still fancies the Kingdom to come out on top in their own fiefdom.

“We knew the league was going to be challenging because we were down players and things but wrestling the Munster Championship back off Cork was always the main goal this year,” Cooper says.

“The day has come where we’ve put ourselves in a position to challenge for that. Cork are similar to us because they’ve come through without being tested as well so both teams are going into the unknown to see exactly where we are.

“We’ll get a good test off each other and that will suit both teams. A Kerry side can always test themselves against Cork to see where they’re at. Come Sunday evening, we’ll know exactly what we need to do to improve as a team with aspirations of winning the All Ireland.

“Cork will want to make sure they’re in the hat for the quarter finals while we’re very keen on wrestling back the Munster Championships. If we can do that, getting one over on Cork is always a nice bonus.”

In what will be his first appearance at a Munster Final, former Dubs star Ciaran Whelan is also backing the home side.

“I’m looking forward to going down to Killarney as this will actually be my first time at a Munster Final,” Ciaran says.

“People have complained in the past about Cork and Kerry only having one real game before they get to Croke Park but with all the other provincial finals looking unbalanced this should be a quality test.

“Cork are a bit under the radar this year as they didn’t really take the league that seriously and they tampered with their team a bit in the last few rounds. Kerry are looking to freshen it up this year under new manager Eamonn Fitzmaurice. The personnel is largely the same but a lot of the key players are in better form like Tomas O Se and the Gooch has moved to the half forward line. It’s the last push for a lot of these players but they’re very difficult to beat in Killarney.

“I would be worried about the Kerry defence but a direct game with quality ball into Donaghy (if and when he comes on) should be the key difference in the game.”

The Big Reviewski || JOE · The Big Reviewski with Dune, a mini-Hangover reunion & the best of Timothée Chalamet
popular
Alec Baldwin fatally shoots woman with prop gun on movie set
HBO announces a new Sopranos series is in the works... kind of
CONFIRMED: Nightclubs to open at 100% capacity, 11.30pm curfew has been removed
Two Gardaí assaulted during protest in Dublin City Centre
QUIZ: Can you name all the countries beginning with L?
Here's the lineup for this week's Late Late Show
"It’s obvious these guidelines were issued by Government without any meaningful consultation with the hospitality sector."
You may also like
1 week ago
Wicklow GAA to investigate fight after Under 15 match on Saturday
1 year ago
Post-match celebrations and a lack of social distancing at certain events put club game on hold
1 year ago
Cork GAA pleads with clubs and supporters “not to engage in celebrations that breach current guidelines”
1 year ago
What's the Bronco test and why it may come up in conversation this week
1 year ago
The Andy Moran GAA Isolation Workout
1 year ago
SuperValu, Centra and the GAA team up on initiative to support elderly people
Next Page