Could he be about to become Director of Football?

The post shows the Frenchman standing on a stage, in front of the floodlights.

END_OF_DOCUMENT_TOKEN_TO_BE_REPLACED

The cryptic image is accompanied by the caption:

"I can’t tell you anything but you will love it! @manchesterunited"

Outside of that, there is nothing else to go on. But many Manchester United fans think it means Cantona is about to be announced as Director of Football at the club.

Manchester Evening News has reported that restructuring at United following the departure of Jose Mourinho will lead to the creation of the new role.

And United legend Cantona would be a pretty popular candidate for the role. 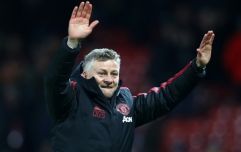 END_OF_DOCUMENT_TOKEN_TO_BE_REPLACED

Cantona scored 64 goals in 143 games for Manchester United. But his impact cannot be measured in just statistics. He was one of the most charismatic and exciting players ever to ply their trade in the Premier League, and a true enigma.

In January 1995, he famously launched a kung-fu kick at an opposing fan, for which he received a lengthy ban from football, and 120 hours community service.

After retiring in 1997, he turned to acting, and has appeared in over 20 films.

He also once took a penalty so hard it burst the devil open.

Clip via The Ad Show

The Big Reviewski || JOE · Mortal Kombat director Simon McQuoid and new Sub-Zero star Joe Taslim on fatalities and fight scenes
popular
120 person wedding party in Longford was "very disappointing", says Pavee Point Co-Director
Here's the lineup for this week's episode of The Late Late Show
Simon Harris condemns "downright stupid" comments about student PUP payments
Joe Duffy listener complains of being quoted €4,100 for three-night hotel stay in Kerry this summer
Irish Government hits back after reports UK authorities will ban Troubles-era prosecutions of British soldiers
Netflix's new thriller Awake puts us in a world where people can no longer sleep
Lidl to sell Covid-19 antigen tests for €24.99 per pack
You may also like
3 weeks ago
Manchester United documentary written by Eric Cantona available to watch at home in Ireland this May
5 months ago
Marcus Rashford launches book club to help kids experience 'escapism' of reading
6 months ago
Paul Pogba releases powerful statement in response to 'fake news' from The Sun
6 months ago
The JOE Pub Quiz: Week 214
8 months ago
Harry Maguire gives his version of events in Mykonos in TV interview
8 months ago
Twitter delete their own tweet after Manchester United complaint
Next Page