European football roundup: The year so far in La Liga Part I

La Liga is on its winter break, and so it's time to sit back and take stock of exactly how things are shaping up so far. Will the title race turn into a three-horse affair, or will it be the same two dukeing it out come the end of the season? Who's in the race to stay in the Primera and try to avoid the drop to the Liga Adelante, and have fortunes turned around for a few clubs who had a poor start to the year? JOE's resident La Liga and European football fanboy /hipster takes a look through the division.

END_OF_DOCUMENT_TOKEN_TO_BE_REPLACED

Not a standout season for the side from Andalusia, who languish in 16th spot as we head into the break. They've gone about getting their transfer business in early doors as they signed Chilean Hans Martínez from Universidad Catolica, hoping to improve their squad and stay out of trouble in the bottom half of the table.

Their form has been much improved in the last few games however, and they've claimed 13 of a possible 21 points on offer, only suffering defeat at the hands of Real Madrid (hardly a surprise) and fellow strugglers Celta Vigo. The traditional pescado on Christmas Eve must have been that bit tastier after those results, but the management will be worried about the fact that six of their players are out of contract at the end of this season, and may well be talking to clubs about moves this January and a thinning of a squad that already lacks depth could spell real trouble for them. Rodrigo Rodri, on loan from Barcelona B, has shown some real quality and helped himself to seven goals in 14 games, as part of a side that is desperately struggling to score. 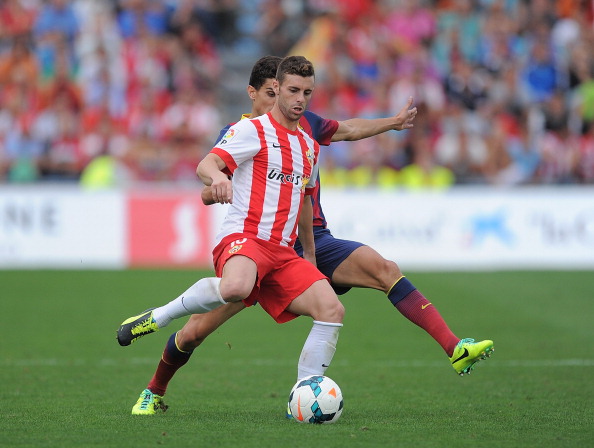 It may be fair to say that the previous two seasons have been a slight statistical anomaly for the side from Bilbao, but they have also been historic. Under Marcelo 'El Loco' Bielsa, they went to the final of the Europa League and Copa del Rey, but came away empty handed, and then the wheels came off last year as they began to get too close for comfort to the bottom of the table, although eventually finished in 12th, meaning Marcelo Bielsa was not offered an extension. They also said goodbye to their old home stadium La Catedral San Mámes, which was an important moment for the club. 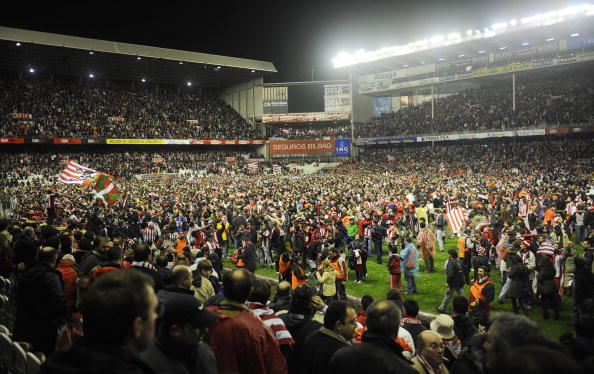 This year, they are finding their feet, and perhaps their level as they go into the break in the Champions League spots. The loss of Fernando Llorente in the summer had little impact as he had already fallen out over contract negotiations and wasn't playing much last season, but they have found goals all over the pitch in his absence. Mike Rico, Oscar 'played on with a torn testicle' de Marcos and Markel Susaeta have all chipped in, while the supremely talented Iker Muniain also has a few to his name, including a hugely important goal against Barcelona.

They start 2014 with a derby against Real Sociedad, who are right behind them in the table in fifth, which is a game that will definitely be worth watching.

END_OF_DOCUMENT_TOKEN_TO_BE_REPLACED

Another strong start under EFE Manager of the Year Diego Simeone saw Atleti begin the season with a bang, which many thought would fade away as the games drew on, especially considering they had lost Radamel Falcao in the summer. Although they had proven that their stock was on the rise with a Copa del Rey win at the end of last season, the side seemed to be thought of as making up the numbers in the top four, but that has proven not to be the case. Diego Costa caused quite a stir and a bit of debate when he declared that he wanted to play for Spain, but he is without doubt the form striker in the league in the absence of an injured Messi. Raul Garcia has also shown his ability to become more of a 'killer', as Marca described him, and he's chipped in with his fair share of goals with ten so far.

David Villa however, is free to negotiate with other clubs come January, and while their squad is playing well, they cannot afford to lose el guaje with a real charge for the title underway for los colchoneros. In the last few weeks their defending has looked that bit more laboured, conceding more than they would have liked against Levante, and they may be one side that is very glad of the break.

Their most outstanding performance was most likely their demolition of Getafe by a scoreline of 7-0, emphasising further that there is a huge gap between them and the rest of the field.

END_OF_DOCUMENT_TOKEN_TO_BE_REPLACED

This season started with a huge summer signing, but the inflated price which Madrid paid for Gareth Bale made Neymar's €57 million signing seem almost low key. He seemed to hit the ground running a bit quicker than the Welshman did in the nation's capital, and has six league goals to his name. The absence of Messi has clearly been a problem for the blaugrana, as it would be for any side, but it's becoming more of an issue off the field than on it. While he has been recovering in Argentina, there has been speculation about his contract, he's blasted the board and rumours are now circulating that PSG are interested in handing over a dumptruck full of money for the Argentine.

You would have to be very silly to think that they would sell him, but all this discontent can't be good for the team. Similar negotiations dragged on with Iniesta, who eventually signed on the dotted line a few days ago, but Pinto, Valdes (who is definitely leaving), Montoya, and Bartra all find themselves out of contract this season and may be negotiating in January with other sides. Alexis has looked a much better player in the absence of Messi, and his eight goals so far this season are proof that his form has improved, as has that of Pedro who's scored ten, and his hat-trick in eight minutes against Getafe was pretty impressive.

Tata Martino is a man increasingly under pressure also, and the speculation is that he will not see out the two years on his contract. He has attempted to adapt and evolve the pressing and quick passing game that Barcelona play, opting for some more direct passes and long balls when the option is there. However it doesn't seem that 'Plan B' is working, and they are resorting to it with more regularity than the Catalan press would like. Still, they've only suffered one loss so far this season, and sit atop the table at Christmas, things could be worse.

Their erstwhile manager Pepe Mel has been much talked about in England in recent weeks with jobs lining up for him to possibly take (including that of Big Sam at West Ham, now that the West Brom talks seem to have come to an end), but it should be remembered that he too is out of a job for a reason. His Betis side sit rooted to the bottom of the table in a very difficult position, having been so good last season and qualifying for the Europa League. 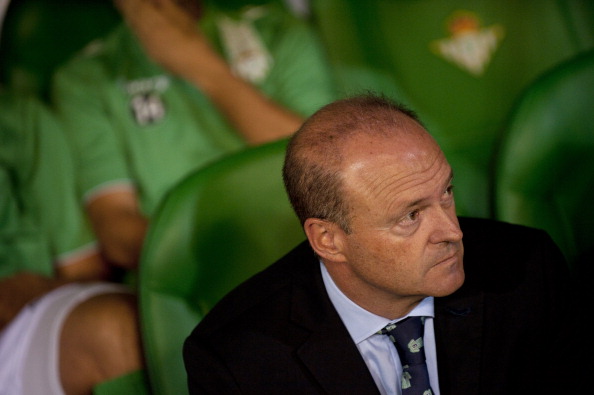 However his sacking after a heavy defeat in the Seville derby and a draw with Rayo hasn't changed their fortunes, and new manager Juan Carlos Garrido has quite a struggle ahead of him in turning this around. They have conceded 36 goals so far, which has lead to them eyeing up a goalkeeper in the January window, despite bringing in Guillermo Sara just a few months ago. They strengthened in the previous window with some good signings (bringing several players in from the brilliantly named Chilean side Club Deportivo Huachipato), but they seem not to be clicking yet, which lead them to sacking the sporting director Vlada Stosic too. The team does have more to give, but it may not be enough to keep them up at this stage.

One of the most promising managers in the game at the moment, Luis Enrique, is in charge of the Galician side, but his fortunes have been mixed, to say the least. There have been some flashes of hope, and they do play attractive football, but they lack the penetration to score enough to get results. When it clicks, it clicks very well, which it did when they thrashed Málaga back in October away from home, and scored some quality goals.

Rafael Alcântara, brother of highly sought after Thiago of Bayern Munich has impressed with some good performances so far this season, and the 20-year-old has three goals to show for it so far. He is a permanent fixture in the side though, having only missed one game through suspension. 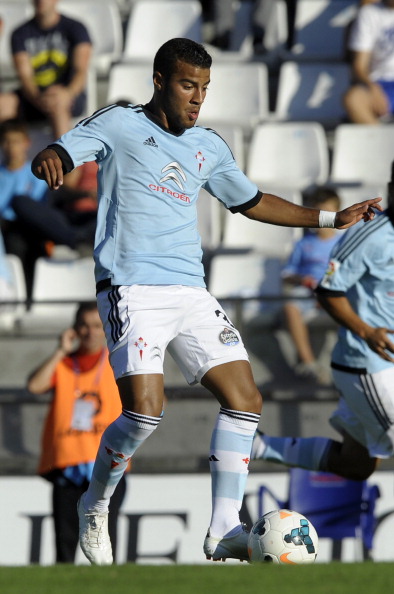 Charles Dias de Oliveira has scored five and Manuel Nolito has also shown he's got some talent, so there are plenty of green shoots for fans to cling on to. Their home form is a cause of some concern though, with just seven goals scored and one win so far this season, that will most certainly need to improve if they hope to stay out of trouble at the wrong end of the table.

It's been a decent year in the top flight for Elche, and defender Edu Albacar has classed it as “exceptional”, after they have spent nearly a quarter of a century in the segunda, or below at times. They have also made a strong start to the season and sit in 11th as we enter the winter break, which not only shows that the squad has some quality, but speaks to the standard of the second division from which they came. 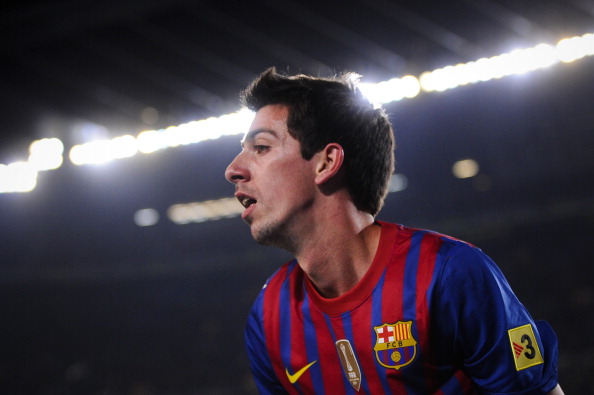 Like many other clubs, there are a few players who are out of contract (five to be exact) at the end of this season, and may be on the move, but rumours have been circulating that they are mirando para Cuenca, Isaac Cuenca to be precise, with the option of him going on loan as a reinforcement, and Stefanovic and Flores (one of those out of contract) on their way out the door. Coach Fran Escribá has prioritised a striker and a right winger to help his side get more goals, as they are currently the fourth lowest scoring team in the league, and have sent their people to check on Cuenca in training to ensure that he is in game shape having spent much of the last two years getting almost no time on the pitch and having suffered a serious knee injury.

House of Rugby Ireland · Quinn Roux on finding a home in Ireland and Mike McCarthy brings the absolute HEAT!
popular
The JOE Movie Quiz: Week 86
Majority of English people 'pleased' or 'not bothered' by prospect of united Ireland
Ireland adores Leitrim hurler Zak Moradi on Tommy Tiernan show
Gardaí uncover functioning shebeen in Swords
The JOE Movie Quiz: Week 85
Gardaí warn of scam targeting AIB customers
QUIZ: The JOE Music Quiz: Week 41
You may also like
1 week ago
A documentary about Pelé is coming to Netflix next month
1 week ago
Mum's anger at state of £30 free school meals package in the UK
3 weeks ago
UK records highest daily total of new Covid-19 cases
1 month ago
EA Sports respond to 'baseless' lawsuit over alleged scripting in FIFA 21
1 month ago
Jurgen Klopp argues with BT Sport interviewer over kick off times
1 month ago
Diego Maradona: A remarkable career in pictures
Next Page