Fancy your own stadium in your back garden? This is the ultimate Christmas present

Also probably the most expensive ever too…

We’ve featured some pretty nifty sporting back yards in our time but this is a whole new level of personal sporting luxury.

A crowd called Populous, who built the new Yankee Stadium, Wembley Stadium and London’s Olympic Stadium, are offering private customers a scaled down version for their own private use. 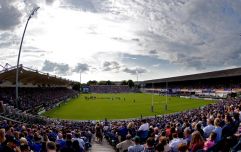 END_OF_DOCUMENT_TOKEN_TO_BE_REPLACED

We say scaled down but this will not fit in your gaff if you have a normal semi-d. This personal stadium requires space, lots and lots of space.

The builder’s plan is to install a 40-50 yard playing field, surrounded by 12 to 20 feet high LED screens. Onto these screens they can put any stadium you can think of. They cite Fenway Park and Lambeau but we’d be thinking more Aviva, Croker and maybe Thomond too. The screens can also be hooked up to show TV so you could play while the Sunday Game was on. Sticking your PS4 or Xbox One in would be pretty amazing too. 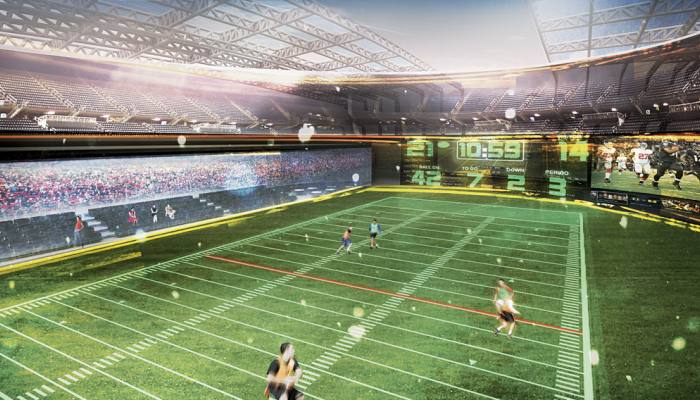 A professional level sound system will play in whatever crowd noise you like to add to the atmosphere and there will also be seats for about 100 people. Those seats are in what is essentially a luxury box, a box that also comes with a full stadium audio mic, so you can live commentate on your friends and family as they play, and have them hear it over the speakers.

But the best bit is the field, which is made of the FieldTurf, a type used in a lot of NFL games. It is embedded with fibre-optic lighting and comes with a switch which instantly makes the field look like a baseball diamond, an NFL field or soccer pitch or whatever you desire. We’re sure we could program in GAA to it too. They’ll even stick a retractable roof on it, if you fancy it. And over here, we’d probably need it.

No, here’s the bad news. The folks behind it reckon it would take at least a year to build (so this Christmas is out) and the cost would be in the region of $30million, or €22million.

They haven’t built one yet, so these drawings are just ideas, but here’s the link, just in case you win the Lotto.

popular
One of the best action movies of recent years is finally available to watch at home
The JOE Movie Quiz: Week 138
Jim Carrey's greatest performance is among the movies on TV tonight
QUIZ: Give this General Knowledge Quiz a whirl
The JOE Friday Pub Quiz: Week 278
QUIZ: Can you name every Batman actor in three minutes?
QUIZ: See if you can ace this General Knowledge Quiz
You may also like
3 years ago
Football fan receives stadium ban, so he hired a crane to watch the game from
7 years ago
Is the San Francisco 49ers' new stadium the most high-tech sports venue in the world? Check it out...
7 years ago
Pics: German football stadium turned into massive living room for watching World Cup matches
7 years ago
Pic: Google Street View now lets you walk inside the World Cup stadiums in Brazil
7 years ago
Video: This brilliant timelapse video shows how Wembley staff transformed their football pitch into a boxing arena
7 years ago
Pics: The plans for the stadium for David Beckham’s MLS franchise are quite spectacular
Next Page