Beating the Twenty20 world champs in their own back yard is pretty freakin' sweet.

As Trent Johnston explains below, Ireland don't reach these sorts of heights, in any sport, too often.

Name the last national sporting side to beat a current world champion?? Is there one?? I can, @Irelandcricket..... Haha #ThatsWhy 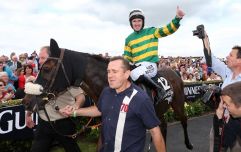 END_OF_DOCUMENT_TOKEN_TO_BE_REPLACED

Over in Kingston in Jamaica, Ireland managed to restrict the West Indies to 116 for eight in their 20 overs. With the very gettable target, Ireland set about their task with some relish and the boys in green did the deed with five balls to spare and with only four wickets down.

Ed Joyce went 40 not out and the winning runs were scored by that man Kevin O'Brien (above).

The result even cheered up disconsolate Arsenal fan Dara O'Briain

After an otherwise grim night of sport, nice to hear that @Irelandcricket have beaten World T20 champs the West Indies! Maith sibh!

Congrats lads, you made us all proud yet again.

popular
Man in his mid-20s dies in two vehicle collision in Cork
QUIZ: Test your skills to the limit with this General Knowledge Quiz
Man arrested following discovery of a body in apartment in Dublin
Family of Ashling Murphy share heartbreaking tribute at Fleadh Cheoil
Weather advisory issued as temperatures in Ireland set to soar again
The JOE Movie Quiz: Week 166
The JOE Friday Pub Quiz: Week 306
You may also like
2 years ago
Win phones, drones, headphones and more every day until 31 December
4 years ago
You need to check your lotto tickets ASAP if you bought them in this Dublin store
5 years ago
Cavan man deliberately waits 2 months to claim EuroMillions win
7 years ago
Competition: Win a luxury break in the g Hotel & Spa Galway
7 years ago
CLOSED: Win: The ultimate day out at the Ireland v South Africa November international
7 years ago
[CLOSED] Competition: Hey rugby fans! Fancy winning tickets for Leinster v Munster at Aviva Stadium?
Next Page