They're looking to score on and off the field.

Every single football transfer usually goes through the same stages.

1) Player gets dropped for a few games. 2) Player starts getting stroppy and sends 'mixed messages' about his future. 3) Journalist writes/tweets tenuous transfer rumour. 4) This story gathers traction. 5) Rival fans engage in pointless debate of 'he's shit vs he's great' on Twitter. 6) Stats are brought out. So. Many. Stats. 7) Player starts following a few other players from their potential new club on social media. 8) The deal is off. 9) Random 'replacement target' that absolutely nobody has heard off is mentioned as a likely replacement. 10) The deal is done.

END_OF_DOCUMENT_TOKEN_TO_BE_REPLACED

Well, Juventus didn't need a genius to see the merits of Cristiano Ronaldo and after being treated to some incredible World Cup matches, there's no excuses for scouts/managers when it comes to finding new talent.

Spare a thought though for Shountrade AFC, a team that play in Limerick's Desmond Football League. With pre-season in full swing, the lads don't exactly have a Football Manager-esque database of players to pick from but that's not to say that they're not embracing modern technology to find the best talent available.

As you can see in the post below, Shountrade are being very busy over the summer months.

END_OF_DOCUMENT_TOKEN_TO_BE_REPLACED

"Transfer window slow this summer with Cristiano Ronaldo pissing off to Juve for himself. His loss. Time to ramp up the recruitment for next season in Div 1. Swipe away for a chance to play. Fair shoulder in the streets, slide tackle in the sheets," they state.

Well, here's hoping that a few players will be swiping right for them. 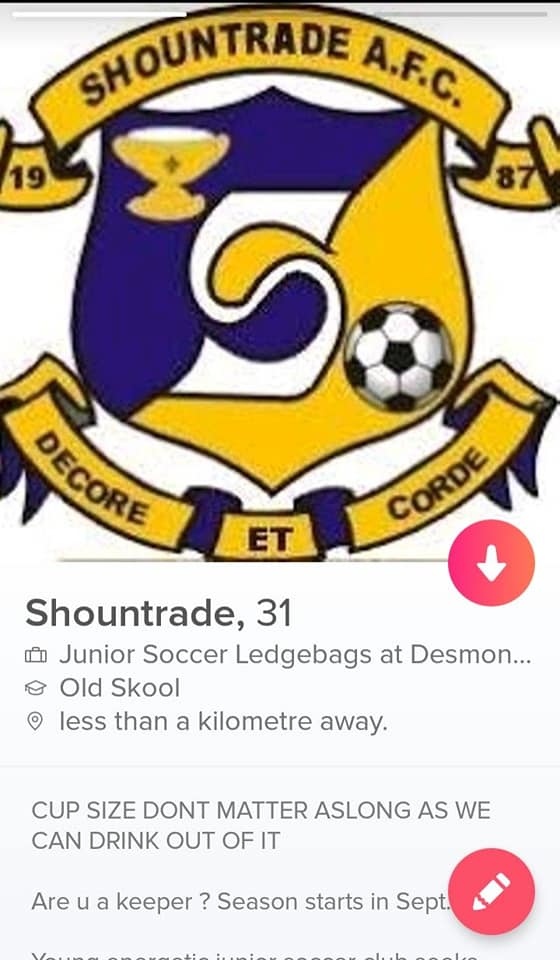 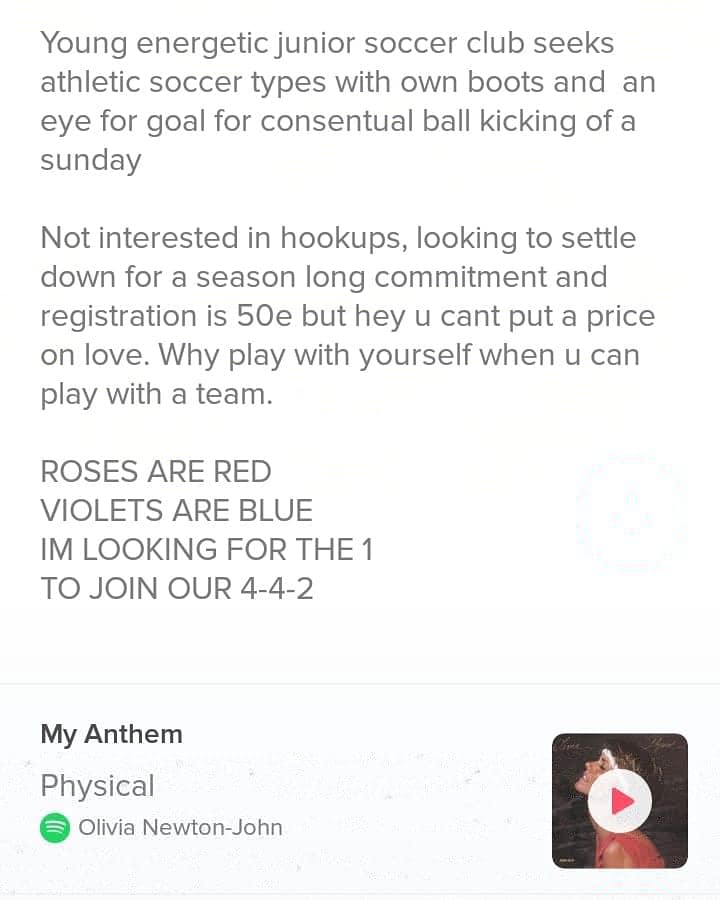 We reckon that their pre-season routine is going to be hot and sweaty.

popular
Bus Éireann’s service from Dublin to London will restart this week
Gardaí unveil new Armed Support Unit vehicles to replace older models
Netflix has just added 33 very big movies to its library
Gardaí are going global with new roles created in UAE and Bangkok
The full list of cancelled flights in and out of Dublin Airport on Monday (so far)
An action-packed thriller is among the movies on TV tonight
A star-studded crime thriller is among the movies on TV tonight
You may also like
2 weeks ago
Gary Lineker says he suffered racist abuse during football days due to "darkish skin"
1 month ago
Merseyside police defend ‘exemplary’ Liverpool fans tear gassed by French police
1 month ago
BBC trainee accidentally posts message mocking Man United live on TV
1 month ago
Kurt Zouma charged with three animal welfare offences
1 month ago
The JOE Friday Pub Quiz: Week 295
1 month ago
Wagatha Christie trial: Rebekah Vardy denies leaking Riyad Mahrez message
Next Page