GAA has overtaken soccer as Ireland's most popular sport

In the same research, Katie Taylor was named Most Admired Athlete.

The Teneo Sport and Sponsorship Index (TSSI) for 2018 has been released, and discovered for the first time in nine years, GAA has overtaken soccer as Ireland's most popular sport.

The index involves a 1,000-person nationally representative survey with quotas imposed across gender, region, age and social class examining the Irish general public’s attitudes towards sport and their sporting heroes.

END_OF_DOCUMENT_TOKEN_TO_BE_REPLACED

Meanwhile, Katie Taylor was found to be the most admired athlete, with 19% of the vote, followed by Jonathan Sexton (11%), the O'Donovan Brothers (10%), Peter O'Mahony (6%), Joe Canning (4%), and Conor Murray (4%). No mention of Conor McGregor in this listing.

So of the other highlights include Ireland's Greatest Sporting Achievement of the year going to Ireland beating New Zealand in the Autumn Internationals, and the 2019 Rugby World Cup being the most anticipated sport event for next year.

Check out the full findings here: 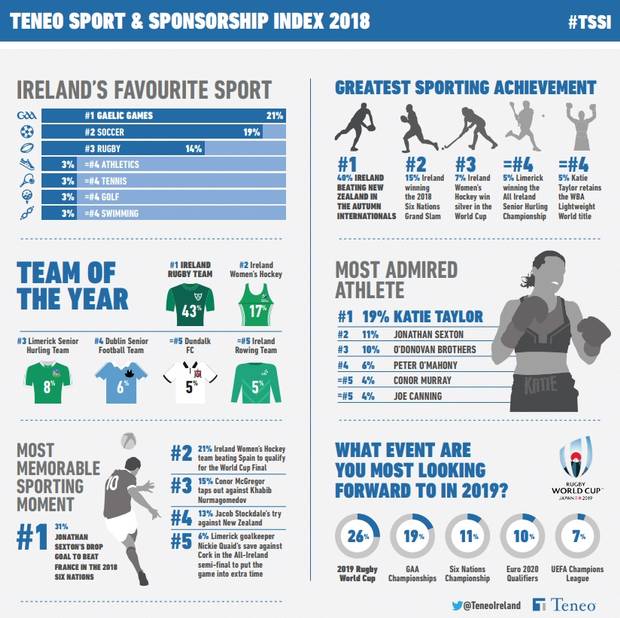 popular
20 years ago, one of the best sci-fi movies of the 21st century was a box-office bomb
U2 drummer Larry Mullen Jr. says band may perform without him in 2023
Peter Kay moved to tears on stage while opening his first stand-up tour in 12 years
The 50 most iconic songs of all time* have been revealed
Mia Khalifa claims seaside town is better than Miami
The JOE Movie Quiz: Week 182
Simon Cowell concerns fans with appearance as they 'don't recognise him'
You may also like
1 month ago
Brendan Óg Duffy's father speaks powerfully about his son's death
1 month ago
Gardaí investigating alleged assault on under-9 GAA player at children's sports event
3 months ago
Roscommon GAA confirms investigation into alleged assault on referee during juvenile game
4 months ago
Looking for a hotel room for the All-Ireland Final weekends? It won't come cheap...
5 months ago
Taoiseach condemns "disturbing" fight at Galway v Armagh game
6 months ago
The 2 Johnnies share unbelievable catfish ordeal affecting over 40 people
Next Page