GAA Review: Dublin take Leinster, Armagh’s goalfest and not one, but two schemozzles

Another weekend of Gaelic football is in the books, and it was full of everything you could want in the GAA.

Dublin deliver, in the end

Everyone was picking Dublin to do the business against Meath in the Leinster final. Everyone. So when Meath rattled off six points in a row to lead by two at half-time, there were an awful lot of worried faces inside Croke Park.

END_OF_DOCUMENT_TOKEN_TO_BE_REPLACED

The Royals had started sharply via Stephen Bray and they managed to restrict Dublin to shots from distance and close to stands after Paul Flynn had scored an early goal for the Dubs. Despite lots of fine interplay by the likes of Ciaran Kilkenny, Paul Mannion and Flynn, Dublin found it hard to penetrate and even the normally reliable Stephen Cluxton was misfiring his chances from dead balls.

At the other end Meath weren’t creating much but in midfield Conor Gillespie was more than breaking even and they managed to manufacture a few frees which Mickey Newman slotted over expertly.

Dublin began the second half with purpose but they simply could not shake off a dogged Meath and it wasn’t until 10 minutes from the end that they broke free. Mannion scored the game’s second goal, via a rebound off keeper Paddy O’Rourke and that set up a six-point gap, one that was too big for Meath to breach.

In the end the final margin of seven points was near enough to how most people felt the result would look, but the game certainly did not. Meath showed that Dublin can be at least frustrated in desire for goals and forcing them out wide tests their kicking skills to the maximum. On the positive side Kilkenny was superb, a real treat to watch with great skill, power and vision. He is now a real handful and on a day when Bernard Brogan was quiet, the youngster led the line.

END_OF_DOCUMENT_TOKEN_TO_BE_REPLACED

There are a lot of positives for Meath to take from the game too, and they certainly appear to be a team on the up. Considering that Graham Reilly might have had his least effective day ever in green and gold, they can really build on that rock-solid hour they put in. As for Dublin, Jim Gavin will probably be happy enough that his side was tested before the real big boys come in August, but he will have worries too.

Cian O’Sullivan didn’t have a great time in the middle, Cluxton’s long-range radar was wonky and stalwarts like Brogan and Diarmuid Connolly failed to impose themselves on the game. Gavin has options, lots of them in fact, so a little more tinkering may be required over the next few weeks.

Qualifiers punch above their weight again...

Where to start with these games? The simplest, and possibly least interesting, was the awful beating that Armagh dished out to Leitrim. Paul Grimley’s side are built to attack and they unleashed the full force of that on the Connacht side on Saturday night. Scoring eight goals is a massive return at this level and the winning margin, 27 points, is also huge. Armagh have been very impressive in the back door. Galway will be quaking in Salthill.

END_OF_DOCUMENT_TOKEN_TO_BE_REPLACED

Two games this weekend might be better known for the fights that happened rather than the result. Cavan and Fermanagh met again and with three reds and 14 yellow cards, as well as an all-in free for all, the game wasn’t much of a spectacle. Cavan proved that they do have the better forwards and after racing into an early lead, they never looked back. 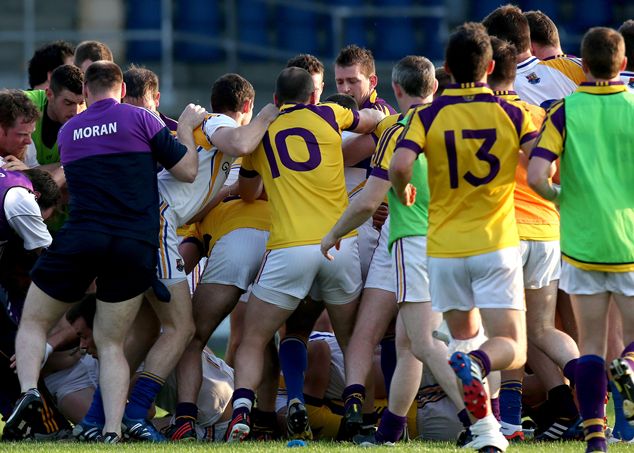 Over in Pearse Park, an even more serious row at the end of normal time of the Longford-Wexford game might yet have repercussions down the line, with Leinster chairman Martin Skelly saying in the Examiner: “Discipline in this game will be dealt with at national level. They will review any footage there is, and if action is to be taken there will be.”

As for the game, it was tight, as expected but Wexford just showed a wee bit more class to get over the line in extra-time.

The most interesting game, at least to this observer, was the clash of Kildare and Louth which for a long time looked like being the end of the road for the Lilywhites. Louth went four points clear at one stage in the second half and it looked like the shock was on.

Instead Kildare found a gear they couldn’t, or were not allowed to, against Dublin and rattled off 1-10 to 0-2 to win comfortably. The goal, by Tomas O’Connor, four minutes from time, killed the game off. O’Connor, along with Eamonn Callaghan, Seanie Johnston and Alan Smith, showed that this panel has depth and they all played vital parts in the run to victory. 1-19 is a big score and with Tyrone up next, in Newbridge, Kildare could just be hitting the sort of form to win the biggest of the Round 3 Qualifiers.

As for our predictions, it was dicey at times but we went five for five this weekend in eircom’s Win,Lose or Draw game. Proof that miracles do happen...

It was a decent weekend for most of the eircom ambassadors too, though Mickey Harte will have slipped a bit by picking Fermanagh but most of the ambassadors picks landed, leaving it very tight in the table.

To play the game and be in with a shot to win tickets, signed merchandise and VIP tickets to the All-Ireland final, then just click here.

popular
Amazon Prime Video has just added 38 very big movies to its library
Mia Khalifa claims seaside town is better than Miami
The 50 most iconic songs of all time* have been revealed
5 must-watch shows and movies streaming on NOW in December
The start of the superhero takeover of Hollywood is among the movies on TV tonight
Did you spot the explosive detail in the latest episode of The White Lotus?
21 jokes that are so bad they're actually brilliant (but still quite bad)
You may also like
2 weeks ago
Dublin nightclub suspends security guard following racism allegations
3 weeks ago
QUIZ: How well do you know the towns and villages of Dublin?
1 month ago
6 deadly whiskey distilleries and experiences to try out in Dublin
1 month ago
Man in serious condition following assault near Connolly Station in Dublin
1 month ago
Gardaí investigating "all the circumstances" following discovery of woman's body near Luas tracks
1 month ago
Two girls seriously injured in crash involving car and pedestrians on busy Dublin street
Next Page