Two decades on from a disappointing and ultimately tragic World Cup campaign at USA ‘94, the world is falling back in love with the Colombian football team again.

It’s well over 24 hours since Luis Suarez allegedly took a bite out of the shoulder of Giorgio Chiellini, yet it appears as if it is still top of the news agenda worldwide. We’re not trying to make light of what Suarez did, but shocking and unseemly as it was, sometimes you need to put things into perspective.

20 years ago, a highly-fancied Colombia side (under quite severe pressure) crashed out in the group stages of the World Cup in America and the tragic tale of Andreas Escobar, the highly promising defender whose own goal against the host nation contributed to their exit, is so well-known it needs no repeating at this stage.

END_OF_DOCUMENT_TOKEN_TO_BE_REPLACED

Colombia did make it to the subsequent World Cup in France in 1998, but their exit in ’94 signalled the beginning of the end of a star-studded team featuring talents such as Faustino Asprilla, Freddy Rincon and the unmistakeable Carlos Valderrama.

All three were present in France alongside a then 27-year old goalkeeper Faryd Mondragón, who probably never envisaged a) that it would be 16 years before Colombia would play in another World Cup or b) that he would still be involved with the national team as a 43-year old.

As it turned out, both of those things ended up happening as with qualification to the last 16 secured following very impressive wins against Greece and the Ivory Coast, Colombian manager Jose Pekerman was able to introduce Mondragón from the bench for the final few minutes of Tuesday night’s clash with Japan when victory had already been secured. 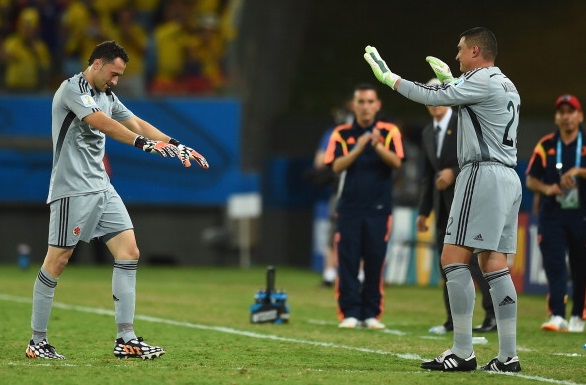 Mondragón will obviously have his own thoughts on the matter, but some will argue that the Colombian squad he’s a part of now is possibly more talented than the most famous Colombian team of this or any generation.

It’s certainly hard not to get excited by the likes of Inter Milan’s Fredy Guarin, Jackson Martinez of Porto and the supremely talented James Rodriguez, the Monaco winger who is up there alongside Arjen Robben as the player of the World Cup so far and whose value has already skyrocketed on the back of three magnificent displays.

Just watch the manner in which he took his goal against Japan and try not to be impressed.

END_OF_DOCUMENT_TOKEN_TO_BE_REPLACED

There is an admirable fearlessness about the way Pekerman has Colombia playing and it’s going to take some team to stop them in the knockout stages. Judging by what we’ve seen to date (and with Suarez likely to be absent) they will be favourites against Uruguay next time out and, with none of the potential contenders looking bulletproof so far, who knows what might happen after that?

Even if they don’t go on and win the whole thing, it’s going to be an awful lot of fun watching them until their time at this World Cup comes to an end.

The Big Reviewski || JOE · M. Night Shyamalan, Alex Wolff & Thomasin McKenzie talk about their new creepy thriller Old
popular
Only Murders in the Building is a must-watch for fans of true crime podcasts
Pro Evolution Soccer has been killed off after 26 years
The 50 most iconic songs of all time* have been revealed
People think they've figured out the ranking of the viewers on your Instagram Stories
Dublin pub hit with 'about 50 or 60' fake bookings on first day of indoor service
QUIZ: Ignite your brain cells with this testing general knowledge quiz
PICS: The man with the biggest penis in the world has one unbelievable problem with it
You may also like
1 month ago
Christian Eriksen stable but may not play football again, says sport cardiologist
3 months ago
Ryan Giggs charged with assaulting two women and controlling or coercive behaviour
3 months ago
Martin Compston reveals moment he delayed Line of Duty filming to watch Scotland penalty shoot-out
4 months ago
EA Sports bans Irish FIFA player who racially abused Ian Wright for life
5 months ago
TOWIE star Mark Wright is officially the worst player on FIFA 21
5 months ago
Jamie Carragher reacts to hilarious TikTok remix combining on-air yelp with John Legend song
Next Page