We take a look at some of the most iconic and brilliant victories for the Brazilian football team over the years, starting with this classic World Cup Final victory in 1970 against Italy. 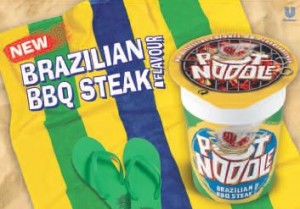 END_OF_DOCUMENT_TOKEN_TO_BE_REPLACED

The team that won the 1970 World Cup in Brazil is widely revered as the greatest football team of all time. They set the standard for all Brazilian teams to follow and it was they who defined Samba football. It was a team which was led by Pelé in his last World Cup final, captain Carlos Alberto Torres, Jairzinho, Tostão, Gérson and Rivelino. 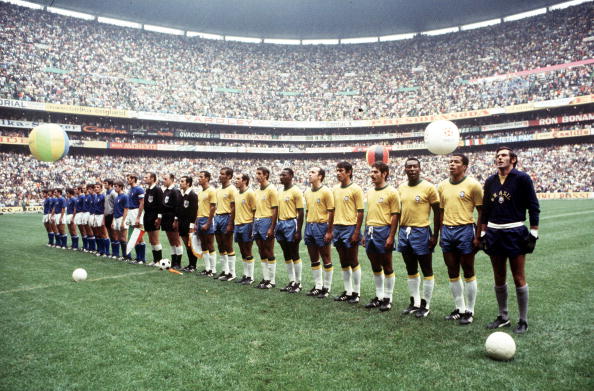 Brazil went into the final having won every match along the way including all their qualifying matches for the tournament. They came up against a very strong Luigi Riva inspired Italian team in the final played at the Aztec Stadium in Mexico City in front of a crowd of 107,412. People expected a tight game and for just over an hour, it was exactly that, before Brazil went up through the gears and produced a display of attacking football at it's absolutely thrilling best to eventually hammer the Italians 4-1. 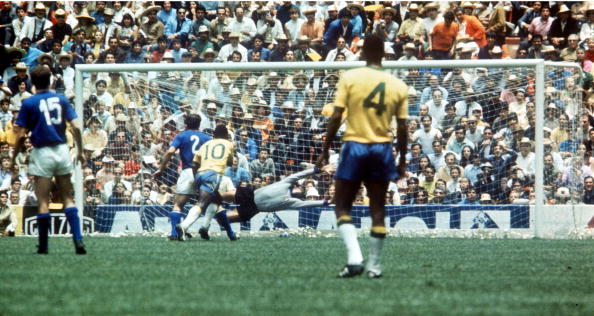 END_OF_DOCUMENT_TOKEN_TO_BE_REPLACED

Pelé was the best player on the planet for over a decade and came into this tournament knowing it would be his last World Cup. He opened the scoring in the final for Brazil in the 19th minute with an absolute bullet header (pic above) from a Rivelino cross. It was a header of superb execution where he rose, hung in the air and snapped his neck back to arrow the ball past a despairing dive from Italian legendary goalkeeper, Dino Zoff. 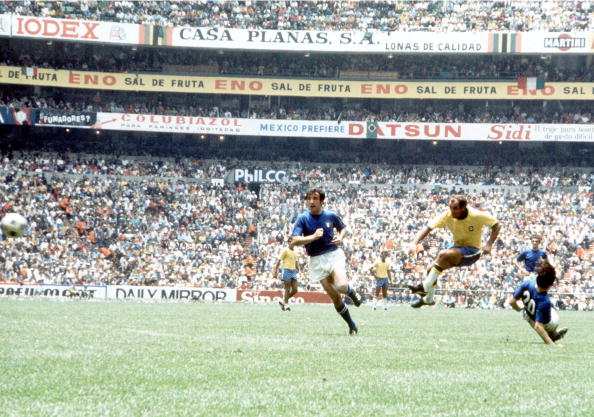 Italy had the temerity to equalise in the 37th minute following a mistake in the Brazilian defence which led to Roberto Boninsegna scoring for Italy. Brazil continued to probe and attack the Italians from all angles and in the 66th minute, Brazil's powerful central midfielder Gerson scored a stunning goal (pic above) from outside the box with a vicious swerving strike into the far corner. The floodgates had opened and from then on, it was party time for Brazil as they treated the world to a thrilling exhibition of football rarely ever seen before or since. 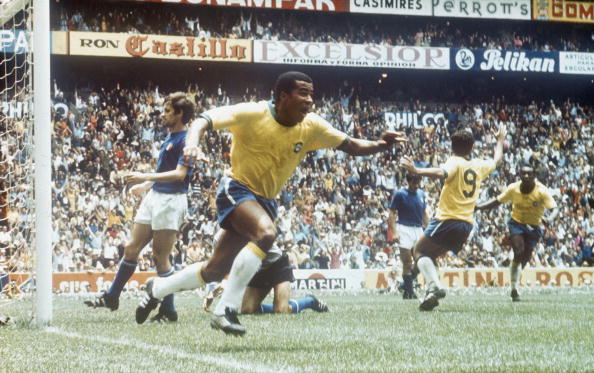 END_OF_DOCUMENT_TOKEN_TO_BE_REPLACED

Only five minutes had passed from Gerson's goal when Jairzinho (pic above) put Brazil further ahead with their third goal. Gerson played it into the Italian box where Pelé cushioned a sumptuous header into the path of the onrushing Jairzinho who bundled it into the net. This goal meant that Jairzinho had scored in every single match at the finals, the only player to have ever done that to this day. It was 3-1 to Brazil and the game was as good as over.

The goal which put the seal on the victory for Brazil is often described as one of the best team goals of all time. In a mesmerising passing move involving nearly all of the Brazilian team, the ball eventually lands at Pelé's feet and he in turn casually rolls it into the path of their galloping captain Carlos Alberto who, without breaking stride, hammers it into the corner of Dino Zoff's goal. A goal of utter brilliance and an era-defining goal for Brazil.

popular
The JOE Friday Pub Quiz: Week 300 - the Triple Century
One of the most underrated sequels of all time is among the movies on TV tonight
A classic Western is among the movies on TV tonight
Rain and thunderstorm warning extended to include 15 counties
Met Éireann gives update on weather warnings for this weekend
New horror movie trailer has one of the best jump scares in years
QUIZ: Can you match all 32 counties up to their province?
You may also like
2 days ago
Gary Lineker says he suffered racist abuse during football days due to "darkish skin"
3 weeks ago
Merseyside police defend ‘exemplary’ Liverpool fans tear gassed by French police
1 month ago
BBC trainee accidentally posts message mocking Man United live on TV
1 month ago
Kurt Zouma charged with three animal welfare offences
1 month ago
The JOE Friday Pub Quiz: Week 295
1 month ago
Wagatha Christie trial: Rebekah Vardy denies leaking Riyad Mahrez message
Next Page