This is the goal that sent us there.

All that has changed, thanks to another indomitable performance from the Green Machine. 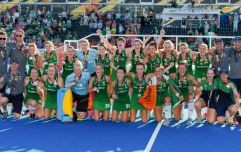 END_OF_DOCUMENT_TOKEN_TO_BE_REPLACED

Ireland's women fought through another tense penalty shootout, this time against Spain, with keeper Ayeisha McFerran again putting in an utterly tremendous performance in nets.

But the massive moment of celebration came after Gillian Pinder's sudden-death penalty. Pinder, who had gone first for Ireland, had already opened the shootout scoring — but now, with the weight of expectation on her shoulders — she delivered once more, coolly sweeping the ball to the side of the keeper and stroking it into the goal.

popular
Katherine Ryan says famous TV star is a ‘predator’ and everyone in industry knows
20 years ago, one of the best sci-fi movies of the 21st century was a box-office bomb
QUIZ: Only the sharpest will get 100% in this General Knowledge test
QUIZ: JOE's Big News Of The Day Quiz #19
The JOE Movie Quiz: Week 181
The JOE Friday Pub Quiz: Week 322
8 Irish Christmas markets and festivals you need to visit this winter
You may also like
9 months ago
Former Irish hockey star's elaborate scam exposed after multiple victims come forward
4 years ago
Mariah Carey is a big fan of the Irish hockey team singing 'All I Want For Christmas' at their homecoming
4 years ago
Huge outpouring of support for Ireland Hockey team following World Cup final
4 years ago
WATCH: O'Donovan Brothers give fantastic shout-out to Irish hockey team during post-race interview
4 years ago
"They fight for every single moment" - Ireland's hockey coach gives emotional post-match interview
4 years ago
Breathtaking penalty win sends Ireland through to Hockey World Cup final
Next Page